A friend of mine, Sheri Graner-Ray, has a well known signature on all her emails: "What if the player is female?" Today, I received a call from an industry colleague of mine who had a similar question:

"What if the player is black?"

You might wonder, "Why didn't he call a black game developer?" Two reasons: a) He didn't know anyone well enough to call them, and b) Something I'll call "politically correct fear." It's a concern at the base of every person who is not the demographic they are curious about.

"If I say to someone, 'Can I ask you about how you perceive blacks in games?'" my friend continued, "will he think I am a racist? And is it okay to say 'black,' or should I say 'African American'?" 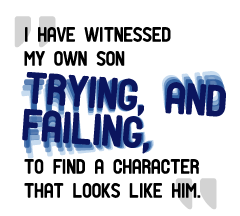 If you know me through picture alone, you might wonder why on earth my colleague would ask these questions of me in the first place. However, the issue is of immense personal importance to me and something I have studied quite a bit. See, I have three brown kids of varying shades, so the question is not only a professional one but a personal one as well. When they play videogames, I wonder, what do they see? I have witnessed my own son trying, and failing, to find a character that looks like him. Everyone with his father's Caribbean accent is a bad guy. And he can only make Daddy in a game if Daddy wants an afro, dreads or corn rows.

As both a parent and a game developer, that sort of stuff stays with you. For my son, ultimately, we ended up with something that kind of looks like a dark guy with white guy hair - in other words, nothing like him at all. My husband's avatar looks like he did in the 1970's, I suppose. We did the best we could. We settled.

I answered my friend's second question with a "no." Asking someone about their cultural experience doesn't make you racist any more than asking me how I perceive women in games makes you sexist. It makes you curious, and it might make you more educated, too. On the other hand, automatically associating one's color (black, brown or whatever) with a specific culture (African-American or Caribbean) isn't always a failsafe proposition. On the island of Barbados where my husband comes from, he's black, true enough, but he's really "high brown," Black Irish or a "redman." The dividing line isn't as clear as some would like it to be.

It was, in part, the time I spent living and working in Barbados that gave me my first taste of how the world must look through the eyes of a black person in both the game industry and as a player: Everyone was a different color than me. I was often the only white person in the room, in the store, as far as the eye could see. Everyone on TV, in the papers, in the government, everywhere was black. For the first time in my life, I was exceptionally conscious of the color of my skin. I doubt any of the locals cared. There were a few comments suggesting I consider a mate of my own color ("Geh she wa she own kine!"), but other than that, nothing.