Asante Bradford has experienced it, too. He's the Digital Entertainment Liaison for the Georgia Film, Music & Digital Entertainment Office. It's his job to bring game development to the state of Georgia. He's having a lot more luck with that than he is creating himself in a game world. "Developers need to do a better job of creating avatars that represent African Americans with more attributes than a big afro. I don't have an afro! I used to have one, but now I have no hair! When will they make African-American bald Avatars?" It seems like a ridiculously simple question, but for many black characters in games, it's afros, corn-rows or nothing at all.

"All in all, I feel that videogames have come a long way," Kevin says. "Videogames will keep evolving and everyone will have more features in their games to choose from so they can create characters that look and talk exactly like them. So, I'll just try and wait it out for now, but maybe later when there is a more diverse population in game design then we'll see these changes." 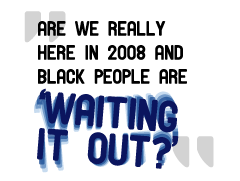 Are we really here in 2008 and black people are "waiting it out?" Seriously?

"There are black characters in videogames," a fellow developer who happens to be African American tells me. "They're just the classic, negative stereotypes and nothing more." He puts it to me this way, using my culture for emphasis: "Imagine if all Irish-American people were portrayed as drunken, fighting fools throwing up into their pot of gold. That's pretty much what we're dealing with here."

Aaron Lenard, a graduate student studying animation, is more blunt. "Off the top of my head, I honestly cannot think of a black or African-American character that has positive attributes or is a positive protagonist in a videogame. Overall, I believe they are treated either as a second or third sidekick, the comical clown of the group, or have attributes that seem sometimes racist."

As examples, Aaron cites characters from the action-adventure and fighting genres. The black characters are either non-existent or consistent in their overall attributes. Consider:

While some of these characters evolve over the games' various iterations, their past is interesting to study. "Most black characters in fighting games have a fighting style of either boxing or kick boxing, and their back stories deal with entering these tournaments for either money, power, women or all the above," Aaron tells me. "Since fighting games are obviously violent, some attributes of these characters are ridiculous. In some later Mortal Kombat games, Jax has metal arms that can shoot missiles, and in current iterations, he randomly pulls out a machine gun and shoots his opponent. The same thing happens with T.J. Combo. One of his fatalities or finishing moves in the Killer Instinct series is pulling out a pistol and shooting his opponent."