Seth Smith, also a student of game design, expresses his thoughts on black characters in games in terms of "hang ups," a decidedly uncomplimentary place to start a discussion. "Black videogame characters are typically portrayed with personalities and styles that embody hip hop, reggae or other aspects of black culture. Most of the time black characters have stereotypical hairstyles or street wear such as afros, dreads, cornrows, baggy jeans, bandanas, chains, wife beaters, jerseys and sneakers." Think of Afro Thunder from Ready 2 Rumble, Eddy Gordo from Tekken, Dee Jay from Street Fighter or Elena from Street Fighter III 3rd Strike: Fight for the Future.

"Personally, I believe black people are generalized in order to appeal to the black demographic," Seth says. He acknowledges that it is a double-edged sword. "Most black people I have seen tend to gravitate to the token black characters in a videogame. However, it also makes those black characters seem artificial and one dimensional by parading them around as the 'I'm the black person in this game' characters." 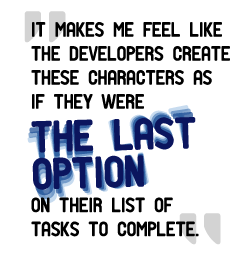 Aaron moves in for the finishing move: "It's ridiculous sometimes, and it makes me feel like the developers create these characters as if they were the last option on their list of tasks to complete."

That's assuming they make it onto the list in the first place. Seth and his friends spent the better part of an evening trying to come up with a list of black characters in games, and came up with fewer than a dozen. In a medium that's several decades old, that's the best we can do?

It's not just the appearance of black characters in games, though. The game players and future developers took issue with their personalities, too.

"Black characters are generally portrayed as strong willed, ignorant or obnoxious powerhouses who tend to throw their weight around without any regard or concern for anyone but themselves," Seth says. "I feel the angry black man and strong black woman stereotypes are used as the basis of these characters. This usually causes the characters to feel unoriginal, uninspired and out of place, because the angry 1960s-era mentality typically does not reflect the mindset of today's black youth."

In his opinion, most black characters tend to be prone to violence and opposed to any course of action that requires patience or critical thinking skills. He names names, too: Barret from Final Fantasy 7, Augustus "Cole Train" Cole from Gears of War, TJ Combo from Killer Instinct and the Grove Street Gangstas from Grand Theft Auto: San Andreas.

One parent, also a game developer, told me he feels uncomfortable letting his kids play these games not because of the violence, but because of how they portray black men.

And so I return to my friend's original questions, but without many original answers. After all, I am not the demographic I write about. Instead, I'd like to pose some questions of my own. Could Angela Bassett find herself in a videogame world? Is Kevin Powell still waiting it out for a skin tone and a hair style that makes him feel welcome in a game? Could deeper research into a culture lead games beyond those stereotypes? What about more black game developers?

Seriously, what if the player is black?

Brenda Brathwaite is a freelance game designer, professor and Chair of the Interactive Design and Game Development department at the Savannah College of Art and Design. She has been in the game industry since 1981 and has shipped 22 commercial titles.