Try to view the game industry's never-ending parade of dragons, robots and space marines from an outsider's perspective, and it's easy to see why many developers are growing tired of looking inward for inspiration. At first glance, BioWare seems to embody this gripe. Browse their back catalogue of games, and you'll immediately be struck by their close involvement with the Star Wars and Dungeons & Dragons universes - epicenters for the hardcore gaming fanaticism that have been a stumbling block for the videogame industry as it strives for mainstream cultural acceptance. Yet it was with these intellectual properties that BioWare made their name as a developer, breathing new life into them and creating something uniquely their own.

Making a game larger than the sum of its intellectual property is no simple feat. But BioWare founders Ray Muzyka and Greg Zeschuk are well acquainted with looking at things from a broad perspective. Before BioWare became a respected game developer, Zeschuk and Muzyka were practicing medical doctors. It's a background that played a major role in the development of BioWare's uniquely empathetic attitude towards game design.

Muzyka and Zeschuk both practiced for around a decade before devoting themselves solely to game development. Says Muzyka about his speciality, "We both trained as family physicians. I did family med and primarily emergency medicine. I had over 20 different hospitals where I had practicing privileges, mainly doing ER work." Similarly, Zeschuk practiced family medicine with a focus on geriatrics.

Medicine and game development were never really separate career phases for the BioWare founders, though. Instead, their two professions progressed in tandem, playing separate and equally important roles in the company that developed into BioWare. In medical school, seeing a gap in the educational software available to doctors, Zeschuk and Muzyka developed two pieces of software to use for training purposes, one of which was, as Zeschuk is quick to note with amusement, "the highly regarded Gastroenterology Patient Simulator." After they became doctors, their salaries largely went towards getting the nascent BioWare up and running.

Aside from Zeschuk's training software, medicine and gaming rarely crossed paths for the aspiring developers. However, Muzyka and Zeschuk's experiences as doctors provided the philosophical foundation of BioWare that has been instrumental to its unique success. 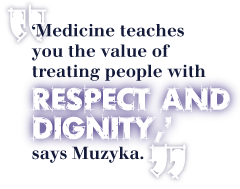 "[Medicine] taught you some really valuable principles for life in general. ... It teaches you the value of treating people with respect and dignity," says Muzyka.

In this age of E.R., Grey's Anatomy and the celebrity physician, it's almost underwhelming that respect for other people would be one of the main things Zeschuk and Muzyka took from their years as doctors. I half expected to hear about the influence advanced surgical techniques had had on conversation trees. It was only by stepping back to survey their entire catalogue that I realized many of BioWare's games are united by a profound sense of empathy.