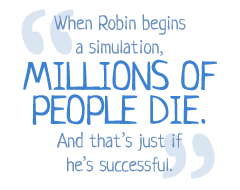 As researchers go, Robin Baumgarten isn't especially unusual. He sits down at his desk, does his calculations and runs his experiments. Tucked away behind the leafy trees and aging museums of Imperial College, London, Robin's duties have a rather unnatural side-effect. When Robin begins a simulation, millions of people die. And that's just if he's successful.

Robin's not a virologist, he's not working with Ministry of Defence funding and he doesn't have a secret underground lair. In fact, ask him what he works on during the day and you'll probably drift off after the first few syllables. Robin is a researcher in the Department of Computing at Imperial College. And the Petri dish for his most recent work? The cult multiplayer strategy game DEFCON. For him, nuclear holocaust is just part of the equation.

Robin's work represents a new thrust in academic institutions the world over to use videogames as a test bed for cutting-edge research, and for the game industry to reap the rewards in return. For a medium that began in the supercomputers tucked away at the Massachusetts Institute of Technology, the thought of gaming once again gracing the halls of science and engineering is an exciting one, and Robin represents a key part of building the relationships that will facilitate this exchange of ideas.

The project initially only aimed to replace the standard DEFCON A.I. with a more capable model, but this simple idea led to significant results, both for Robin, who composed a master's thesis from the work, and for Introversion, who will soon have tools that they can release to players to let them write their own A.I. for the game. "When we have more people writing A.I. for this game," Robin enthuses, "we're hoping to run competitions at conferences and other events."

The origins of the project are more humble than you might think. Introversion approached Robin's project supervisor, Dr. Simon Colton, some time ago at the Games and Media Event, a one-of-a-kind conference held annually at the university.

"Mark Morris [of Introversion] came up to me over a beer and said, 'We've been thinking of getting research going with universities,'" Dr. Colton explains. "One thing led to another. The major breakthrough was when Introversion said they would allow us full access to their code for DEFCON." With funding and resources secured, Robin's project culminated in an improved A.I. and scope for further work. Since then, Dr. Colton has undertaken research projects worth hundreds of thousands of pounds with companies such as Rebellion, the developers behind Alien vs. Predator: Requiem and Rogue Trooper.

Letters to the Editor: The Future of Gaming The Escapist Staff 0 Comments