It wasn't always this complicated.

Being an eager, fresh-faced fan of videogaming during the birth pangs of the industry didn't carry any particular connotations of fanaticism. People who liked Pac-Man just played it in the arcades until their pockets were empty. Likewise, home computer owners who found themselves enjoying the antics of Monty Mole or Sabreman simply made sure they owned the latest installment of their adventures. At most they may have chopped a poster out of a magazine to cover a bare patch on the bedroom wall, or written a letter to Ultimate to beg for some free stuff. Dizzy had his own collectible cards and a mug, but that was something of an exception. These early attempts at merchandising were closer to a mail-order sideline than a genuine business operation.

In the 1990s, all that changed. A huge marketing push would result in either a Nintendo or Sega system in a vast number of U.K. households. Other users trundled on with an Amstrad, Amiga or Atari ST, but it was the console generation who were the focus of the ad men's eyes. The same executives who had ingeniously marketed toys in the 1980s by disguising lengthy adverts as cartoons needed a new outlet, and they found it in videogames. Sonic and Mario, as console figureheads, were perfectly placed to lay the groundwork for a carpet bombing campaign of commercialism. Branded clothing, comics, mugs and, umm, toothpaste were rolled out for every console-savvy child to spend their parent's cash on, symbolizing a growing awareness in the industry that there was money to be made in ways beyond software and hardware. If little Jimmy wanted a Sonic letterman jacket to wear to school, now he could have one.

Prior to this era of commodification, fans were likely to distinguish themselves by defending a certain piece of hardware more than any individual character. Playground scuffles ran broadly along the lines of "my system is best." Such adolescent forays into Orwellian Nationalism - "the habit of identifying oneself with a single nation or other unit, placing it beyond good and evil and recognising no other duty than that of advancing its interests" - were ugly, but no more unusual than the concurrent clashes over sports, television or anything else school children argue about. 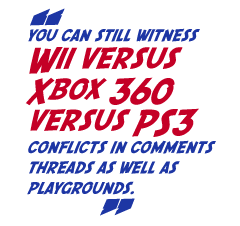 Of course, you can still witness Wii versus Xbox 360 versus PS3 conflicts in comments threads as well as playgrounds. Gaming may have grown up a little, but the arguments haven't. However, a large sub-section of fans would emerge from the '90s exhibiting new, character-/ game-specific loyalties.

It's difficult to say whether this was due to increased character exposure, better graphics or the steady growth of gaming as a popular pastime. This character fandom is perhaps comparable to the explosion of interest in Premier League football around the same period. An answer to "what's your favorite videogame character?" has never reached the same level of social necessity as "what team do you support?" but both pursuits went through comparable '90s marketing blitzes that resulted in a surge of public self-identification. In the U.K., the decade which demanded everybody make a lot of noise about being a football fan was the same one which saw a growth in the number of people declaring just how much they love Sonic the Hedgehog.

This wasn't necessarily a good thing. Indeed, few characters have suffered as much indignity at the hands of this phenomenon as our rapid blue chum.