Many of today's Sonic fans were first introduced to the ring-collecting rodent on the Mega Drive in 1991. They were bombarded by the accompanying marketing and post-launch commercialism, which probably resulted in the purchase of at least one item of Sonic merchandise. A Dr. Robotnik duvet cover, perhaps. Or a complete selection of Knuckles steak knives. This isn't necessarily a problem - unless the duvet cover is still in use twenty five years on and the steak knives have been embedded in family members. In some quarters, however, this milieu of character-themed products has had long-term consequences. There are people now in their 20s and 30s who are utterly obsessed with Sonic.

In relative isolation, those at risk of taking their fandom to extremes might have naturally defused themselves. Lacking a network of other like-minded individuals to reinforce their behavior, socialization through education and work should have prevented too many people trotting off towards wackyland. But from the mid '90s onwards there was just such a network accessible to everyone with a telephone line. On the internet, these hyper-fans were (and still are) able to soothe and nurture each other's obsessions in the secluded comfort of private forums. Simple, anonymous interaction has unplugged the stoppers of self-control and allowed the murky water to come gushing out. (In this metaphor, water represents serious, scholarly YouTube videos about Sonic's love life.)

It's pretty harmless for the most part. For every utterly bonkers woman who thinks she's married to Sonic, there are hundreds of people who just find comfort in drawing pictures of Tails ... err ... starring in S.T.A.L.K.E.R. A few troubled souls are clearly mired in this stuff to an unhealthy degree; the rest are just unfortunates, trapped in a cycle of creating amateurish fan works in return for the meager boost of happiness a positive online response may bring. 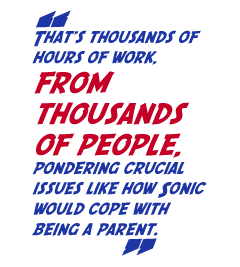 Those familiar with the dark corners of the internet already know how far this malaise extends. Just in case though, here's a brief refresher. There are over 10,000 Sonic the Hedgehog entries on fanfiction.net. Some of them are novella length. That's thousands of hours of work, from thousands of people, pondering crucial issues like how Sonic would cope with being a parent. The writing is generally poor, full of horrible clichés, naive romance and blunt exposition: forgivable in the case of youngsters experimenting with narrative, but entries in excess of 250,000 words which reference Johnny Cash and John LeCarre suggest a somewhat older membership.

Meanwhile, over at deviantART there are scores of people, churning out weak facsimiles of characters that weren't exactly rich with artistic value to begin with. Within their tight-knit communities, few receive genuine critiques of their work - instead they're bolstered by empty platitudes which serve only to reinforce social niceties. It's not impossible to imagine compelling works of art incorporating elements of Sonic the Hedgehog. It's just ... extremely difficult.

Why should this matter? Nobody is forcing anyone to pay attention to hopeless webcomics stuffed with sardonic-eyed, anthropomorphic animals, or any other Sonic-inspired output. Yes, a Google image search for "Sonic and Sally" with the safety off is now a minefield of absurd erotica, but were this the only side effect of an increasingly bizarre fandom perhaps we could rest more easily.