In Sonic's case, however, the unhinged fan-mania appears to have slowly fed back into the franchise itself. Looking at the ever-diminishing returns which have passed for the last few Sonic titles, it seems that Sega has latched onto the minority who shout the loudest and longest and actually started catering to their whims. Rather than distancing themselves from the more extreme elements, they happily court them (a financial decision, one must assume). It no longer matters whether it was a rabid fan base that guided Sega's direction, or vice versa. At this juncture they are both to blame for their dysfunctional relationship.

Remember the charming, fast-paced platformer that engaged so many back in 1991? The current crop of the franchise is a long, long way from those days. Not just in terms of modern presentation and complexity, but in the ludicrous plots which pander to fan-fiction authors by serving up further helpings of ridiculous material about Chaos Emeralds. The latest Sonic game is an RPG-based affair, sub-titled The Dark Brotherhood, for heaven's sake. In a couple more years Tails' collection of My Chemical Romance albums and Shadow's problems with self-harm will probably be canon. 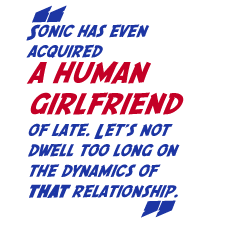 Similarly, each release seems to introduce even more characters, who either express painfully outdated '90s 'tude or embody nightmarish, huge-eyed infantilism - again, pleasing both fan-author and fan-artist alike. Judging by some of the seedier online Sonic haunts, some fans now find it difficult to ascertain whether Cream the Rabbit is a character name or an imperative from the developers. Sonic has even acquired a human girlfriend of late. Let's not dwell too long on the dynamics of that relationship.

It doesn't stop there. There are larger groups in other gaming communities who are so entrenched in the world of their chosen obsession that they dedicate unnatural amounts of time attempting to shape their cherished games as they see fit. Where it is present, this implicit pressure will surely be to the detriment of a given series. Fans are capable of offering valid development suggestions, but game designers must avoid Sega's fate and shun the tyranny of the vociferous. We can all name films which have been all but ruined by audience focus groups. Gaming must be careful if it wishes to avoid similar casualties.

You may not particularly care about Sonic, but the problem reaches beyond a solitary blue hedgehog. Visible pockets of fans can easily be mistaken for commercial opportunities, and developers are always under pressure to follow the money. Consider a future where Valve paid heed to the most unbalanced aspects of fandom. In this grim world, the Portal sequel is 12 hours of twee comedy songs played by a sexualized companion cube - where the end of every torturous utterance rhymes with "cake" or "triumph." Half-Life 2: Episode 3 becomes an extended anime-style romance between Gordon and Alyx (while her creepy dad watches), and Left 4 Dead is a tale of four hardy neck-beards battling a legion of flying ninja-monkey-zombie-pirate-samurai.

Peter Parrish is a freelance writer and Cure fan. His Robert Smith slash fiction can be read at ... ha ha, no, of course it can't.