It's not that hard to understand the plight of the deaf gamer - just try playing Dead Space with the sound turned off. 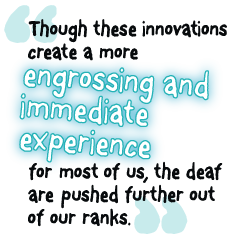 Dead Space without sound is fundamentally broken. Carefully crafted moments of tension and release are replaced by endless frustration. The game becomes nonsense, a disconnected mess of monster muggings and seemingly random events. For many people with partial or total hearing loss, this is what it's like to game today. Though hearing players may not often notice, the leaps in graphics technology developers have made over the past decade have been accompanied by similar leaps in audio. And with every passing year, as clever game designers seek ways to remove clutter from the display, more important gameplay information moves off the screen and into the soundscape. Though these innovations create a more engrossing and immediate experience for most of us, the deaf are pushed further out of our ranks.

How can modern, sound-dependent games like Dead Space be made accessible for the deaf? It's not a hard problem to solve. Back in 2004, a ragtag group of unpaid amateurs figured it out in their free time. Well, not entirely amateur - the group was led by Reid Kimball, currently a game designer with Buzz Monkey Software in Eugene, Oregon. Kimball has partial hearing loss and had, over the years, grown tired of the increasing obstacles placed in his path when gaming. He wanted to create a closed-captioning system for games, a system that would subtitle not just the dialogue, but all the sounds in a game that convey important information. The trouble was, he couldn't find a team of people to help. That help eventually came from an unlikely source: a message board flame war.

"Somebody had started a conversation about how Doom 3 wasn't subtitled at all, and they wondered if somebody could help," says Kimball. "People started posting on the board with really insensitive, nasty things, saying that deaf people shouldn't be playing Doom because Doom is all about sound and atmosphere."