When Barack Obama's campaign purchased videogame advertising in the run-up to the November 4 election, many saw it as a sign of tactical sophistication. The Obama campaign knew there were votes out there in the land of Burnout Paradise, NBA Live and NFL Tour, and that those voters were tough to reach though old-school channels like TV ads. The available cultural avenues keep expanding with each election cycle: 2008 also saw the introduction of Twitter and increased use of online video. The cash spent on the videogame trial run was a fraction of the campaign's total budget, but analysts expect this amount to grow in future elections. 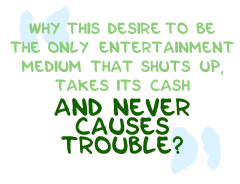 This, to me, is the disappointing thing: Games are about to make a direct leap from political scapegoat to political ad platform without ever actually becoming political themselves. Why is the games industry so afraid of getting involved in the issues of the day? Why this desire to be the only entertainment medium that shuts up, takes its cash and never causes trouble?

Sex, Sleaze and Symphonies
Elections, and politics in general, are far more vicious than any deathmatch or pixellated chainsaw kill. There's a legend about Lyndon Johnson running for Congress in the mid-1940s: With nine days to go he's 10 points behind and getting desperate. So he calls his campaign manager and says to hold a press conference. At that press conference they'll accuse Johnson's opponent, a farmer, of enjoying carnal knowledge of his sows - of literally being a pigfucker. His campaign manager is shocked: We can't say that. It's not true. "I know it's not true," Lyndon Johnson, future President, replies, "but let's make the bastard deny it!" Assassinations, false-flag operations, break-ins, honeypots, hookers, drugs, blackmail: Electoral politics at its most vicious is the graduate course to Grand Theft Auto's grade school.

Politicians have always grabbed any weapon they could find, including cultural or entertainment icons. Beethoven's 3rd Symphony was originally titled "Bonaparte" after the French commander. The Russian composer Prokofiev wrote music to order for the Soviet Union. Virtually every American president since John Adams has invested in a campaign song, while the list of celebrities who have become political cheerleaders is long and terrifying: Who can blame French President Nicolas Sarkozy for going one step further and marrying singer/model Carla Bruni, even if he does have to stand on a box to appear in the same tabloid headshots as her? Just like entertainment, politics operates on the currencies of appearance and volume, the ability to be recognized and heard. Both are dirty business. Both are ripe for falling into bed with each other.