The Only Thing Videogames Haven't Stolen from Aliens
When it comes to videogames, Aliens is the most influential movie of all time. From 1990's Xenomorph to this year's Gears of War 2, with all of Halo in between and Sega's Aliens: Colonial Marines yet to come, this decades-old film has lent its claustrophobic terror, punctuated suspense and seductive action to dozens of games. More than any other element, however, Aliens' depiction of futuristic marines - foul-mouthed, attractively armored and wielding chunky assault rifles - has endured, defining the sci-fi fighting man for a generation. The space marine is a cliché, but, like all clichés, it has a worthy origin: Aliens is one of the greatest movies ever made.

The irony is that the most innovative aspect of Aliens is the film's hero: a fighting mom, rather than a fighting man. Sigourney Weaver stars as Ellen Ripley in all of the Alien films, and nowhere does her sex have more importance than in Aliens. At a fundamental level, Aliens is about motherhood and the superior strength of mothers over that of male warriors. 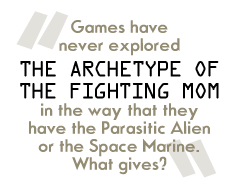 "Nuke the entire site from orbit" - that's her line. It's Ripley who straps and tapes together a flamethrower and an M-41A Pulse Rifle (with over/under 40mm grenade launchers!), creating the most super-badass jury-rigged weapon of all time. It's Ripley who kills the Alien queen. She saves a marine and a little girl. Yet games have never explored the archetype of the Fighting Mom in the way that they have the Parasitic Alien or the Space Marine. What gives?

How About the Boys?
The influence of the Alien films on games is immense and precedes the release of Aliens in 1986. Ridley Scott's Alien, released in 1979, has profoundly affected the aesthetic of the digital beasties we've happily gunned down and the environments in which we've hunted them. Ancient titles, such as Contra and Metroid, took style cues from the biomechanical designs Swiss artist H.R. Giger produced for Alien, as did the recently released Dead Space. The idea of a creature that fatally parasitizes its human hosts and integrates its hive with starships seems both natural and horrifying. Games were smart to steal it.

But as much as videogames have profited from Giger's art, they have made a killing from Aliens director James Cameron's depiction of space marines. Cameron wanted a Vietnam feel for his sequel to Alien. He wanted to show advanced weaponry and training failing against a low-tech enemy, and he also wanted to depict the military defending corporate interests. Thus, the mightily equipped Colonial Marines ship out to planet LV-426 to advance the interests of the Weyland-Yutani corporation. These soldiers have dominated the imaginations of game developers ever since.

Uncivil War: Alien: Isolation - Who Can Live The Longest? Jim And Yahtzee 33 Comments

Comics and Cosplay: Marty McFly Murdered By A T-Rex: The Art Of Ben Chen RossaLincoln 10 Comments