As a Canadian, I was overjoyed to be able to finally play as a fellow Canuck in Call of Duty 3. Considering the significant role Canadian forces played in World War II, it took way too long to get a playable character from my country. That's just the way things go. Canadians are used to being ignored, particularly by a certain southern neighbor. Our population is small, so we don't have enough clout to convince publishers to market games to us. Even though Canada is the third-biggest videogame-producing nation, only a handful of games feature the country or its inhabitants. Sure, a Canada level in Sly 2: Band of Thieves featured some maple leaves, and Bear Hugger's bio in Super Punch-Out!! says he's from Canada, but it would be nice to have some Canadian content that's more meaningful.

It's frustrating to see Canadian stories go untold in videogames. It's frightening, too, considering what a large role videogames will have in our culture years from now. How will a generation of Canadian kids learn about their country when their primary source of cultural engagement ignores it? I'd almost be willing to put up with developers stooping to stereotypes and giving us games like Igloo Tycoon or Moose Rider. Who knows, something authentic might accidentally slip in. 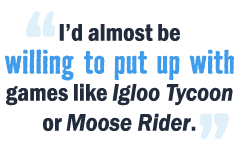 Much better would be games that tapped into the country's rich culture to provide experiences that could share Canada with Canadians and the world. A game could give players an open-world simulation of Canada's fur-trade era, pitting them against the harsh Canadian wilderness in a time of exploration, rivalries between French, English and Native settlements, and the growing power of often-ruthless trading companies. A game could follow the story of a Toronto police officer - a second-generation Chinese-Canadian - as she investigates a series of crimes affecting the city's population, one of the most diverse and multicultural in the world. A game could capitalize on the huge international popularity of the Anne of Green Gables series of books to provide a Sims-like adaptation of turn-of-the-century life on Prince Edward Island, which would surely be a big hit among the growing audience of young girl gamers.

Canada is not unique for having a wealth of stories that are going untold and a culture that's being ignored. How many games take place in Australia, Austria, Turkey, Indonesia or Swaziland? How many let gamers take control of a character from Tibet, Norway, Costa Rica, Libya or the Czech Republic? It's embarrassing to admit how few there are. Yet each of these countries has a history filled with fascinating stories that could launch a million games. They all have cultures that would provide compelling backgrounds for sophisticated and enthralling game worlds. Every country is filled with a population that could provide thousands of compelling, original characters. The world is a giant untapped well of ideas, but game developers seem content to keep drinking out of the same tired bucket.