We get game after game set in New York, Los Angeles, London or Tokyo. Too many games feature the same stereotypical American, British or Japanese protagonists. Developers need to branch out. A simple location choice has been enough to generate a lot of extra interest in Resident Evil 5. Its African setting has earned it most of its hype (and controversy). It will also feature a playable African protagonist, although the star of the game is still a white American. Likewise, the Prince of Persia games, developed by Ubisoft Montreal since 2003, are notable for loosely depicting the ancient culture of an area known mostly in videogames for producing terrorists. S.T.A.L.K.E.R., developed by Ukrainian company GSC Game World, uses Russian history as the basis for its alternate-reality scenario. Grand Theft Auto IV features a Serbian protagonist from former Yugoslavia. Why not a game set in Dubai, a country with improbable architecture, a unique culture and a complex political climate? Developers should set a game in the natural wonders of New Zealand, one of the most beautiful countries in the world as the Lord of the Rings movies showed us. Set games in Seoul, São Paulo, Budapest and Lagos and let us play as Koreans, Brazilians, Hungarians and Nigerians. 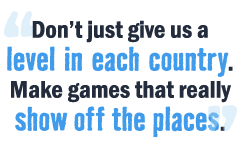 And don't just give us a level in each country. Make games that really show off the places. Let us meet the people who live there. Better yet, let us experience what it's like to live as them. Avoid devolving into "edutainment," but let us learn something about the world while we're having fun. Why do we learn so much about the imaginary cultures of Hyrule, Tamriel, Azeroth and Ivalice before we've learned about the thousands of cultures that actually exist here on our own planet?

It's obvious from the amount of fantasy content in videogames that gamers aren't averse to playing as characters from foreign cultures. Game developers need to stop babying their audience. American, British and Japanese gamers can handle experiencing perspectives outside their own cultures. If the game is good, sales won't plummet just because your main character is from the Republic of Namibia, Singapore or Paraguay. Developers could be doing something rare and innovative in an industry many believe is stagnating. They could tell us new stories from new places and help make the world of videogames a little more colorful.

Chris LaVigne is indeed Canadian, but has never built an igloo or ridden a moose.