Looking through my stack of old games the other day, I realized the enormous quantity of games I've never finished. It's an amount that easily dwarfs the number of games I have completed. I'm not ashamed of it, and I will lay claim in conversation to having played them. It's a glorious thing to walk through life, sampling everything, committing to nothing. What other medium allows us to be so blithely indifferent to its consumption? If you say you've read a book or seen a movie, there's an implicit assumption that you watched the entire movie or read the book from cover to cover. Consuming the totality of a book or a movie is often a defining factor in its quality. We sheepishly admit to never having finished Moby Dick or we proudly tell people we walked out of Pineapple Express. But the videogame we never finish is hardly a source of embarrassment or disgust. We played it, and that is enough.

Why don't we complete the games we start? The industry's common response is that people don't have as much time as they once did, or that the modern audience's tolerance for difficulty is markedly lower than it used to be. There's truth to both of these statements, but there's also a ridiculous nostalgia behind them. It implies there was a moment before Rock Band and Wii Sports when we all finished Super Mario Bros. and beat Metroid without the help of Justin Bailey. The late '80s and early '90s have become a sugar-coated era in game history that many game developers seem content with simply refining. In truth, the answer is more complicated than either of the aforementioned explanations. 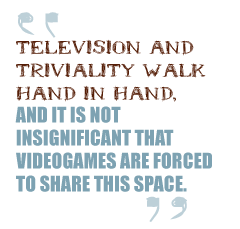 It bears mentioning that there's a cultural bias against videogames that keeps deep, prolonged engagement with a game from being socially acceptable. We bestow finishing difficult books or sitting through long, artistically challenging movies with a dignity playing videogames just doesn't have, perhaps deservedly so. On a cultural level videogames are psychologically moored to the television, an apparatus associated with fleeting thoughts and background noise. Viewers flip from channel to channel consuming small bits of programming, occasionally tuning in for an unbroken hour of content. Television and triviality walk hand in hand, and it is not insignificant that videogames are forced to share this space. For many, videogames are considered an extension of television viewing, something to be cut off or on casually with little regard for the continuity of the experience.

Although this explains why I don't have a problem heeding recommendations from friends who are only half way through the game in question, it doesn't explain why so many of us stop playing a game at the 50-percent mark. One major culprit is repetition: The notion that the first level of Halo is much like the last level of Halo. I understand and sympathize with the developers' logic - once you teach the player the basics, he or she will want to be tested. So the game tests the player, over and over in increasingly more complex ways. The problem is that despite the developer's best efforts to reward the player with crazier level designs, wilder power-ups and twists in the storyline, it's often a matter of diminishing returns from the moment they understand how the game is played. The gameplay mechanic becomes a fixed thing, unchanging and implemented in exactly the same ways over and over. Instead of supporting the narrative, repetitive gameplay often undermines it by erasing the distinctions between one level and the next.