I've always been behind the curve when it comes to videogames, going back to childhood when my parents refused to buy a Nintendo and my brother and I had to rely on older PC games for entertainment. While I never developed the manual dexterity necessary to win an Xbox deathmatch (my performance in Halo is a joke), I do have an interesting series of childhood recollections: top-down terrorist control in Syndicate, the quirky adventure game-style of Quest for Glory, spinning to avoid giant feline pilots in Wing Commander II.

With the old disks lost or rendered obsolete, I thought these games existed only in memory. That is, until a few months ago when my friend Pat mentioned that he'd been playing through System Shock 2, a game I'd heard many great things about but missed when it came out in 1999. Where'd he find it, I asked - garage sale? eBay? 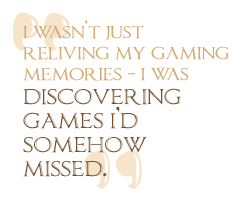 Five minutes later we were at Home of the Underdogs. To me, it was a treasure chest of 16-bit nostalgia. I wasn't just reliving my gaming memories - I was discovering games I'd somehow missed, like the original Prince of Persia, the first seven Ultima installments and the first two Monkey Island games. I found myself thinking about how much money I could get for my Xbox 360; it had, ironically, been rendered obsolete.

Home of the Underdogs is a community for abandonware, games that you can't find in stores and couldn't install on modern computers anyway. For several years now, a small but dedicated group of websites have been quietly building up their stockpile, all with the intent of providing it to people who wouldn't trade their 2-D sprites for anything that current consoles have to offer.

One (or Thousands) from the Vaults
Rafael "Lone Lee" Lopez, founder of Abandoneer and head of the Abandonware web ring, defines abandonware as "any game or application that is no longer supported by its copyrights-holder. The definition of 'no longer supported' varies, but in most cases is about whether or not the game is still sold in stores."

This definition of abandonware means that the majority of abandonware consists of games released in the '80s and '90s across every conceivable genre. Abandonia, one of the largest providers of abandonware with close to 1,100 games, offers titles in genres ranging from adventure, arcade, roleplaying, first-person shooter, side-scroller and text-based games. Titles popular at the time of their release continue to thrive as abandonware, such as LucasArts' line of adventure games or FPSs by id Software. Lopez adds the community is known for "revering some seriously underrated commercial flops."