The internet, as the saying goes, is serious business. From Facebook fanatics who obsesses over how many online friends they have, to World of Warcraft players who spend weeks farming for equipment of no discernable value, all online communities have been the target of ridicule at one point or another. But for Anonymous, everything is fair game. 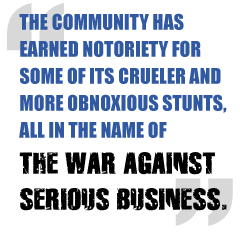 Anonymous, the loosely defined community surrounding 4chan.org's "random" image board (called /b/), is many things to many people. It's an elite hacker network, an internet hate machine, a group of know-nothings, a cabal of know-it-alls, a cesspool of hatred and a shining city on a hill. But for all the colorful names bandied about, few have seen Anonymous for what it really is: a self-contained culture, the extremity of which is difficult to unearth even in the dark corners of the internet. The community has earned notoriety for some of its crueler and more obnoxious stunts, all in the name of the war against Serious Business.

The real world takes itself too seriously, which is why /b/tards - people who frequent /b/ - retreat onto the internet, where they can ridicule the pressures of everyday life by abstaining from them. But many take online communication as seriously as real life, forcing /b/tards to retreat farther from humanity to uphold their ironic detachment. The anonymity that /b/ affords is a surrogate world where anyone can become everyone and pay no heed to the conventions of reality outside the website.

In theory, /b/ is a place where people can leave behind their individual identities and become part of the collective. In practice, the only unity visible on the /b/ image board is the unanimous rejection of the real world as a guide for conduct. The result is the repulsiveness of /b/ that "serious" people abhor: pornography, racism, misanthropy and more frequency and variety of the word "fag" than any Xbox Live voice chat.

For one thing, they're not quite so homogeneously pathetic at all. "The hundreds of people I have met at various Anonymous raids have all been great people from many walks of life," says Mark Bunker, the Producer of xenutv.com, who has been fighting the Church since 1999. "Many of them are young, but not all of them. I've met students, doctors, lawyers, people from law enforcement and so many other fields taking to the streets, wearing the masks and speaking out because they believe it's the right thing to do."

View From the Road: Where Everybody Knows Your Name John Funk 89 Comments
Comments on