I've always had a weakness for women who'll listen to me prattle, and Tanya was one of those. She listened with a vengeance. And she talked about herself and seemed interesting. Slowly, the walls came down and I began to see what made these chat rooms so alluring. I began to see that one could have a life in here. It might not be "real" by every day standards, but it could be as real as you needed it to be: A secret life, full of secret people, all of whom knew your name. Some of whom cared. The only thing missing was sex. And then, suddenly, that wasn't missing anymore either.

I wasn't sure what was happening at first; just like the first time it happened for real. But unlike that sweaty time in that girly-smelling bedroom when we were both so incredibly young and her parents were away, I don't remember the details. Let's pretend, however, that I do and that I'd told Tanya I was a film maker and that she offered to audition on my couch.

Tanya sat down, according to her typed description, and began auditioning. The way an actress might audition if she knew she had no talent. She knew exactly what part I was looking to fill, and threw herself into the role, body and soul. She described every detail. She had a very vivid imagination.

Afterward, she asked me how I felt and I honestly wasn't sure. I felt odd; kind of dirty. I'd never had sex with a stranger before, and I wasn't sure the act agreed with me. I started to tell her this, but for once she didn't seem interested. I got the impression she'd gotten what she came for and was through with me. I was beginning to understand how a cheerleader feels after Homecoming. And then she dropped the bomb. 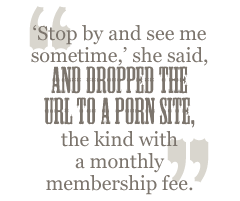 And this, ladies and gentlemen, is how black and white faded to grey. Accidentally throw a single red sock in with the white ones and they all turn pink. In other words, you can lay a million bricks in your life, as the old saying goes, but cyber once with a stranger and you're a pervert. It's not fair, but that's life.