If that were the end of it, I'd probably be fine. Honestly, there are worse things to be than a pervy cybersexer. But that encounter with Tanya taught me a valuable lesson about the nature of the internet; that online, anyone can be anyone for any reason. I'd spent days getting to know someone I thought was going to be a friend. Turns out, she was a virtual whore. I felt like that guy who takes home a date from the Tiki Lounge at Waikiki only to wake up and find his wallet empty and his junk full of clap.

In real life, I'd never fall for that. But something about the internet awakened a sense of community and hope in cynical, jaded techno geeks like me. We saw it as a place where, at long last, we could come into our own. Those who were there at the beginning thought of it as our kingdom with which to do as we willed. I'd set out to use it as a place to make some friends and make a webpage, share some of myself with like-minded fellows, win people over with the sheer force of my shining personality. After getting rolled by Tanya, I decided on a different path.

Flash back to that time in the parking lot when the guy in the long coat caught your attention and you talked to him, even though you knew you shouldn't have. It was like that the first time I heard of Napster: "Hey, you like music, right?" he said, sauntering over to my cubicle. He wasn't wearing a long coat, but he could have been. And he didn't exactly say "the first one's free," but he said something similar and I called bullshit. 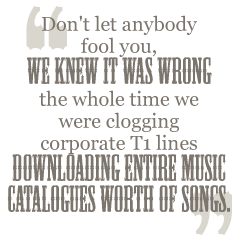 I'd been paying $10 - 12 bucks for an album of music since I was tall enough to hand a wadded fist full of dollars over the top of the music counter. Maybe sometimes I'd borrow a tape or a disc from a friend and make a copy, but somebody always paid for it. Somebody always does. I didn't fall off the turnip truck just yesterday, Jack.

"Wrong-o, buffalo breath," he said. "I got a way you can get your music for free. It's just like borrowing a disc from a friend, except everyone in the world is your friend, and the copies sound as good as the originals." And that, boys and girls, is where digital piracy came from.

Don't let anybody fool you, we knew it was wrong the whole time we were clogging corporate T1 lines downloading entire music catalogues worth of songs, albums at a time, to our personal MP3 collections. We knew, somewhere, in the backs of our minds, we should have paid for it. But it was digital and it was anonymous and that somehow made all the difference.