If I'd physically stolen all of the music I downloaded using Napster in 2001, I'd have needed to rent a panel truck to carry it home. I downloaded thousands of CDs worth of music, didn't pay a dime for any of it, and somehow convinced myself that was OK. If I'd rented that panel truck, carted those CDs into it and carried them home to my house, I'd always have that physical reminder I was a crook. It'd be sitting there, staring back at me, ticking away like the telltale heart. There'd also be a rental receipt for the truck, crowbar marks on the door of the record store and, perhaps, some dead bodies in the road left over from the furious shootout and escape. In other words, there'd be evidence, and it wouldn't go away when I pulled the plug on the beige box.

Stealing while using Napster wasn't real. You clicked your mouse a few times - something you did plenty of every day - and boom, free music. If there was a crime committed it was vaporous, occurring in that grey space between the lines of the language of the law. It's not a crime because the laws haven't been written yet. Welcome to the underworld, kid.

I eventually grew out of my Napster obsession, but not all the way. There was still, in the back of my mind, a nagging feeling that digital meant "not real," and that normal rules didn't apply. "It's the Wild West," we'd say, as if that made it alright. A couple of lowlifes, sitting on an empty railroad platform, taking potshots with their six irons at the locals saying "There's no law, this is the Wild West!" You walk up behind them with your tin star on your chest and say "That don't make it right," before you plug them both in the head with a Peacemaker Colt.

I eventually moved on to games, while I waited for the Marshall to arrive. Actually I only stole one game, but I stole it sure enough. I remember it to this day. It was Medal of Honor: Allied Assault. Later, after I'd played it all the way through, I burned a disc to remind myself it was real and I'd stolen it. I even bought the game to purge my conscience, but I wasn't planning to buy it when I stole it. I just wanted to play it, and couldn't afford to pay. Simple as that. The black was me wanting it, the white was not having the money, and there I was, wallowing in the vast, digital, anonymous grey of the internet. 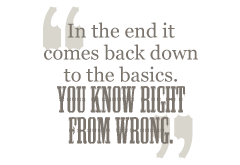 In the end it comes back down to the basics. You know right from wrong. You know what belongs to you and what doesn't. In a world where you can be committing a crime in the background, while using that same PC to donate money to charity, the only authority with the power to hold you accountable for your crimes is you. Same as always, if we want to world to be a better place then we have to make it that way ourselves, brick by brick.

Russ Pitts spends part of every day tracking down people who steal content and reporting them. Sometimes, it takes a thief to catch a thief. His blog can be found at www.falsegravity.com