Videogames can explore a wide range of emotions. Fear and aggression are the usual experiences, but moments of regret, concern and even sadness can unexpectedly arise for an engaged player. Yet despite this huge range, there hasn't ever been a video game about the Christmas spirit. There are no games about giving gifts to others, helping friends and family or being selfless in general. Aside from a few games involving Santa Claus as a one-man army facing down a horde of evildoers, there aren't even many games that cash in on the commercial aspects of the holiday. If a videogame is a series of interesting choices, then surely it must be a possible to make a game about giving presents at Christmas time. 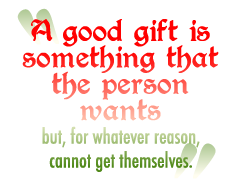 What are the fundamental elements of giving a gift to someone? It's something you know they might want or like. Unexpected or unneeded gifts can often be forgotten or unappreciated, so the difference between a good gift and a bad one is based on the recipient's desires and expectations. Jason Rohrer, in an e-mail, notes, "I've generally found receiving to be a painful experience. Pretending to like a gift even when you don't like it is awkward, and you're never going to get something that you really need because you would have already bought it yourself. This pleasure asymmetry has led me to believe that the whole 'surprise gift-giving' enterprise is a bit misguided. Much better, I think, to do something special for someone at their request - like cook them a meal that they ask for, or give them a much-needed back rub." In that sense, a good gift is something that the person wants but, for whatever reason, cannot get themselves. What Rohrer calls an asymmetry could also be attributed to the imbalance between the recipient's (often) minor pleasure and the giver's more substantial satisfaction; the giver receives more pleasure in the exchange because the act of giving something useful to a loved one feels better than receiving a denied pleasure.

Can that exchange be made into a videogame? In terms of single-player options, there are a couple of possibilities that nonetheless come up short. Healing a member of your party in an RPG certainly seems to meet the basic requirements, but it's more an act of necessity than it is an unexpected perk. It doesn't make sense not to heal them. You could argue that assigning the best items or armor to another member of the party is an act of altruism, but ultimately you're still dispersing the equipment based on gameplay demands rather than personal tastes. Depending on the RPG, denying yourself the best equipment might even tactically work against you.