Let me explain the metaphor. In 1941, the Empire of Japan commissioned the Yamato, the most powerful battleship ever to sail the sea. The Yamato's main batteries could hit with accuracy at ranges up to 25 miles. Her guns fired shells six feet tall, weighing a ton and a half each. Throughout World War II, the Yamato split flagship duties with her sister ship, the Musashi, and to this day she remains a potent symbol of nationalist, industrial and military accomplishment. This afternoon, I worked on a 1/350th scale model of the Yamato, an excellent and very popular plastic kit from the Tamiya corporation. As I write this, I'm wearing a Star Blazers shirt, a 1970s anime series known in Japan as Space Battleship Yamato.

The irony is that the Yamato enjoys enduring fame despite the fact that she was already obsolete while undergoing construction in Kure shipyard. Both the Yamato and the Musashi went down in combat with aircraft carrier groups. Thus, battleships reached their crowning heights at the very moment that they lost relevance in naval combat. 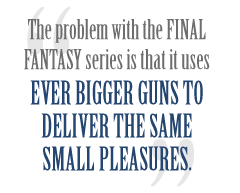 The problem with the Final Fantasy series is that it uses ever bigger guns to deliver the same small pleasures. There is satisfaction in, say, outfitting your party with the game's ultimate weapons, or catching a sly reference to a film, or polishing off the game's last side quest. But each of these little joys comes at great cost to both the developers and the player. Final Fantasy today offers the exact same rewards as Final Fantasy yesterday, only it takes more effort to get them.

Fun Built to Scale
But there remains a way to enjoy Final Fantasy in the modern world. It's the same way that we indulge our nostalgia for the Yamato: by experiencing it in miniature, as a model, rather than as itself.

Nintendo's DS handheld system offers today's best Final Fantasy experience - its remake of Final Fantasy IV. It's a pocket-sized Final Fantasy, a re-tooling of one of the series' most acclaimed titles. Even better, because the DS reads Game Boy Advance cartridges and a port of the original Final Fantasy IV appeared on the GBA, you can switch between the two versions as you progress through them, much as I inspect images of the real Yamato as I glue together my model of it.