Dreadnought's Dread
Ultimately, the troubles of Final Fantasy lie with its charm. From the first game to FFXII, the series has maintained a consistent tone in its plot, dialogue and gameplay. Final Fantasy has the feel of third-rate fantasy literature - imitative dreck suitable for children, but not without a certain charm. 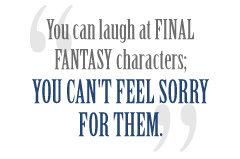 The problem is that this tone doesn't sit well with the current scale of the game. There's genuine artistry in the presentation of Final Fantasy, but the art of the game is put in service of scripts that can only be enjoyed ironically. Listen to the dying words of the Sage, Tellah, in the FFIV remake: "I brought this on ... myself. Letting hate consume me so ... Please ... Avenge ... Anna." After consuming his own life-force by casting the Meteor spell in an attempt to get revenge on his daughter's killer, Tellah regrets his quest for vengeance and then asks his friends to finish this quest for him. What a jerk! You can laugh at Final Fantasy characters; you can't feel sorry for them.

Similarly, the over-developed gameplay has only the tiniest satisfactions as its goal. It's pretty cool to get the most badass weapon in a game, but Final Fantasy seems to have forgotten that the only thing you can do with such a weapon is kill shit with it. The lengths you have to go to in order to acquire the best equipment in Final Fantasy outstrip by far anything you get to do with that equipment. The scale of the challenge doesn't fit the reward.

Final Fantasy needs to return to a size befitting the fun it delivers. This is precisely what has been done with the FFIV remake. The chibi look of the characters is commensurate with their childish dialogue. When Cecil and Rosa discuss the massacre he's just carried out, they look as stupid as the words they speak, and the scene passes briefly. The game doesn't ask me to take it seriously.

FFIV is merciful in the sidequest department, too. Gathering all of the game's goodies doesn't take forever, and, through replays, I get to use the best weapons to beat the crap out of everybody who kicked my ass the first time through.

The age of Final Fantasy has passed. The toy-like pleasures of the series belong in hand-held gaming, not on full-fledged consoles, just as battleships belong on our mantles, above our hearths, not on the wide-open sea.

Ray Huling is a freelance journalist living in Boston, where he waits for the aircraft carrier of RPGs to sail into the harbor.