Recent research by the NPD Group revealed 79 percent of portable gamers use their devices in the home more than any location. This isn't surprising news in itself, but the number seems rather high. Why is the home the preferred location for portable game players? These devices are designed for use outside the home. Gaming everywhere is great in theory, but apparently it doesn't always work that way.

The games themselves may be partly responsible for the lack of interest in gaming in public, especially on the DS. Certain games are meant to be turned up for full enjoyment, and earphones aren't always an attractive option. Sound is essential to games like Elite Beat Agents and downright enjoyable in The World Ends With You. Likewise, games with richly detailed graphics cannot fully be appreciated in public, where there's no shortage of distractions. The more sound dependent games are, the less playable they are in public.

Then there's simple convenience. Handheld consoles are perfect for home use. There's no arguing over the television or computer; they only require batteries and a game. Not only that, you can take them all over the house to play instead of being locked down to one location.

Some of the reason lies with specific game mechanics. You can yell "Objection!" while playing Phoenix Wright, but it's inadvisable to do so in public. It's like yelling "Fire!" - people get a bit edgy at spontaneous yelling. Then there is the blow factor, something that has been problematic from early offerings such as Feel the Magic: XY/XX, where one gamer even reported "getting lightheaded from trying to blow a sailboat." With the microphone held up so close to your face, are you actually able to enjoy the game? Unlikely. 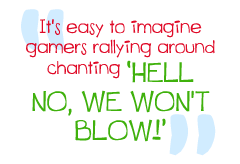 In most cases, the airborne elements of games haven't made the experience easier or more intuitive. Gamers report issues with the microphone not being sensitive enough to pick up their efforts. Silly gimmick game mechanics keep the DS from realizing its true public portable potential. It's easy to imagine gamers rallying around chanting "Hell no, we won't blow!" (At least in public. We do have standards of decorum.)

One way to get around this is to include alternate mechanics so these tricks aren't needed to fully enjoy and finish a game. (For Phoenix Wright, you can just use a button push to get around the objectionable vocalizations, but you still need to blow to dust for fingerprints.) Unnecessary blowing and voice input mechanics help drives DS players back underground: It doesn't stop the games from being sold, but it's enough to keep them from being seen and shared in the open.