There is much about my life that could be considered "geeky." I write about videogames and comic books professionally, my office is littered with a motley assortment of action figures and my idea of a good Friday night often involves a few dungeons and even more dragons. But in spite of all of this, there is only one aspect of my media consumption that embarrasses me: I read books based on videogames. 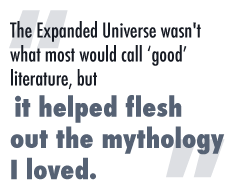 It all started with my love of Star Wars. As a child of the 1980s, I was raised on the original trilogy. Luke was my savior, and Jedi was my religion. The Force-filled universe captivated my young mind, creating an insatiable hunger for anything involving a lightsaber. And this hunger only grew with time. Of course it started with the movies, but before long, I discovered the Star Wars Expanded Universe. These novels opened my mind to a whole new world, filled with new planets, races and characters that the films never even mentioned. Sure, they weren't what most would call "good" literature, but they were jam packed with action and helped flesh out the mythology I loved.

Being a gamer, my Star Wars consumption soon branched out into games as well. Unfortunately, while one can still enjoy a bad book, the same can't necessarily be said for a videogame. For the most part, licensed Star Wars games had little to offer me, the rabid Jedi fanboy, aside from a few interesting connections with the films. Even these were hard to find, as the games tended towards the "awful" side of the gameplay spectrum - that is, until BioWare came along. Unexpectedly and brilliantly, the Edmonton-based developer created a whole new universe within George Lucas' well established mythology: Knights of the Old Republic.

Without the pressure of having to write a story based on the movies, BioWare was able to create something both unique and familiar. A big part of this was the work of lead writer Drew Karpyshyn, who crafted a story set thousands of years before the events of Luke, Han and Chewbacca. This new saga depicted a time when the Sith were just a plentiful as the Jedi, and introduced a number of new characters that would shape the universe to come. Eventually the process came full circle after Karpyshyn wrote a novel set during the same time period. This book, which takes place prior to the events of Knights of the Old Republic, expanded upon the mysterious character of Darth Bane. However, despite the success that KOTOR saw across both mediums, Karpyshyn isn't convinced that games make the best book material.