His feet pumped across the stained blue carpet as he raced to the stairwell, his laptop tucked under his arm. Papers fluttered out of their folders leaving a billowing trail behind him. When he met the stairwell door it crashed open with the impact of his foot, and he started leaping stairs two at a time.

Sixth! Barry snatched the handle of the metal door and flung it open. He took two bounding steps into the hall and tilted to make the 90-degree turn down the linoleum hallway. As he ran he pulled at his tie and the buttons on his shirt began to give way.

He screeched to a stop at the end of the hallway in front of a janitor's closet, jiggled the handle and forced his way in, reaching into his shirt as the door slammed shut behind him.

Barry put his back against the wall and worked his shirt the rest of the way open. He pushed his hand into one open side and produced a headset, which he quickly secured to his ear. Then he sat down on an upturned bucket, slapped his laptop onto his knees and jerked the screen open.

Planet of Battlethings was already booting up as he anxiously watched the bars to go green on his wireless tray icon. The warmth of the access point mounted on the wall next to him felt like a towel fresh from the dryer.

Barry smiled and raised his sword to the skybox. "Behold, guildmates! Dr. Funkentime has arrived to quell this uprising most evil. I have but one question to ask of my brothers in arms before we cut these heathens down. Do you feel funky? Because it's FUNKENTIME!" 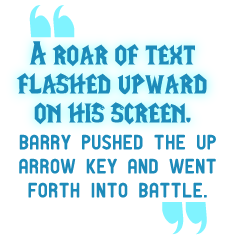 A roar of text flashed upward on his screen. He pushed the Up arrow key and went forth into battle. He could see the cries of his enemies as they fell to the power of his superior guild.

Barry's smile broadened as his fingers danced across his keyboard. He raised his watch up to the glow of his monitor, pursed his lips and leaned over to pull the power plug out of its socket.