As Barry ran down the stained blue carpet towards the stairwell, he felt something unfamiliar. A vibration out of sync with his own steps. He didn't even have to look back.

"Sixth floor Janitor it is, Doctor."

Barry looked behind him as Frank gained on him. "You'll never win, Frank, and do you know why?" Before Barry finished his thought, he smashed shoulder first into the right steel door of the stairwell. Frank gave a little hop and smashed the left with his foot. 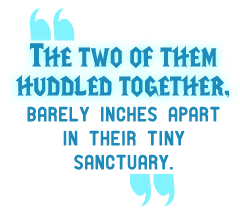 Their laptops were already open as they hustled into the tiny closet and locked the door behind them. Barry took the overturned bucket and Frank had to settle for a box of Raid next to the wall for a seat. The two of them huddled together, barely inches apart in their tiny sanctuary.

On the sparsely covered plains of the ever stretching virtual landscape, Dr. Funkentime and King Babune first laid eyes on each other, then on their clans. Clans that were not locked in a struggle with one another, but united in a single front against the blood-chilling PvP raiders of the server, Ratcliff. A name not even allowed to be spoken in some circles.

Dr. Funkentime: Dear Lord, Frank. This is ...
King Babune: Get it together, Barry. We're in it. We have to deal with it.
Dr. Funkentime: Right. You're right. Ok let's roll.

Barry jumped up from his bucket about four inches as he felt the familiar buzz of his cell. He sat down slowly and looked over at Frank, who was already charging into battle.

"Barry Royce's phone. How may I help-" Barry's face went tight as he looked up at the ceiling. "Hello, Mr. Thompson." He sighed and rested his elbows on his knees.

"Yes sir, I'm down in the server room fixing- no sir, server room 5." He clenched his fist and lightly hit it against his forehead. "What I meant was that I was just in server room 5. Now I'm going over to- what's that? Yes sir. Yes sir. I'll be right up."

Before Barry left the room, Frank received a similar call. Barry could hear a carbon copy of the chewing out he just got. Yes sir. No sir. Right away sir. Frank hung up his phone and looked up Barry as he was about to make his exit.

They stared at each other for what felt like eons. Then Frank unplugged the power cord from his laptop.