Frank nodded and sat back down on the box of pesticide. He was about to speak when both their phones gave a sharp, loud buzz. Text messages. Text messages from management. Messages that said basically the same thing: Report to my office immediately or be fired.

Barry took his phone out of his pocket, looked at it and, with a flick of his wrist, sent it spinning into the mop bucket in the corner. There was a splash followed by a dull thud. 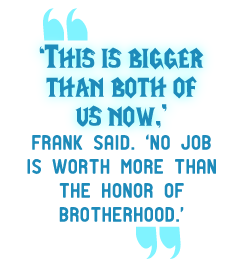 "You're right, man. You're so right," Frank said. "This is bigger than both of us now. No job is worth more than the honor of brotherhood." He looked at his own phone and then slipped it into his pocket. "I would throw my phone in, too, but, this is mine. I paid for it. It's really expensive. I mean, I'm saying, don't worry about that, but I'm just going to put it on silent, OK?"

"It was one of the new Blackberries, but, I kind of got caught up in the moment, and ..."

Barry sat back down on his bucket. "I thought it would be dramatic."

"Oh, it totally was, man. It gave me goose bumps. You were just like, bam." Frank made a tossing motion with his hands.

"Kind of thought ..." Barry said as he plugged his laptop in, "... thought, like, you'd do it too. 'Cause of all that brotherhood stuff you were saying."

"Oh, don't get me wrong. I totally wanted to, but ... you know, I just bought it, and I haven't really backed up my numbers or anything."

Frank nodded. "That is true. You didn't."

Frank slapped his hand on Barry's shoulder and gave him a little shove. "Right on, my man. Let's kick some ass."

Barry glanced up. He thought he heard a faint buzz coming from the murky mop water of the sixth floor janitor's closet. Then he looked back down at the screen.

Stephen Failey was born 25 years ago from an American mother and a British Father, making him a superhuman hybrid of arrogant bravado and constant complaining. Enjoys ice cream for breakfast and is easily enraged by small children. He currently lives with his wife and dog in Northern Louisiana.