The bang of Mr. Thompson's fist on his desk almost sent Barry Royce ass over tea kettle off his computer chair.

"Time to get up, boy! There's work to be done! That's why we're paying you!" Thompson shouted in his thick, possibly fake Texas accent.

Barry stuttered a little and scooted himself back to his desk. "I wasn't asleep, sir."

"Well you sure as shoot tweren't awake, neither!" Thompson shouted as he walked away.

Barry wrinkled his nose at his computer screen. "Tweren't?" He shrugged and started back on the database report he had been working on all week. He managed to work for five minutes before tabbing over to Firefox.

He spoke as he typed. "Urban-dic-shunary, dot, com." He clicked and typed again. "'Tweren't. The area of skin between your scrot and your anus, otherwise known as the bifkin, taint or perineum.' Huh. That can't be what he meant."

"Shit," Barry hissed as he grabbed up some folders on his desk and sprinted down the hall toward the conference room. He ran at full speed until he was two feet in front of the entrance, skid his New Balances to a stop and lightly pushed the doors open. The lights were dim, but not dim enough to slink over to an empty chair undetected.

"You are so freaking late."

Barry nodded. "Yes, thank you Frank. I wasn't sure, what with the presentation being almost over and all." He settled back into the metal chair and tried to cross his legs. Instead, his shoe thunked loudly against the underside of the conference table. He looked around the room along with everyone else, attempting to locate the source of the noise. Then he sunk into his seat for what would be a half hour of pure hellish boredom. He hadn't finished his reports yet, but they wouldn't get to that part until later in the week. Right now, he just had to look in the general direction of the screen and let his eyes glaze over.

Suddenly, his butt cheeks clenched and his feet jerked an inch off the ground, a reflex he had conditioned in himself so as to not pelvic thrust the air when his cell phone vibrated in his back pocket. The little device gave two quick buzzes before going still.

Barry worked his hand into his pocket and pulled it out just enough to see the screen. It was a text message. His heart raced into his throat and his shoulders slumped. 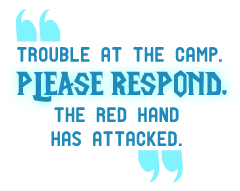 TROUBLE AT THE CAMP. PLEASE RESPOND. THE RED HAND HAS ATTACKED.

"Oh God, not now," Barry mumbled a little too loud.

The presenter paused his slideshow and turned to the back of the room. "Is there a problem Mr. Royce?"

"Oh, uh," Barry said as he was getting up from his chair. "I have, uh, an emergency. I didn't mean to interrupt. I just need to step out for a few minutes."

The presenter nodded. "Please try not to be long if you can help it."

Barry slowly walked to the door and cracked it open just enough to slip out. The light of the office flooded into the room. When it faded to a thin line he was gone.