Jerry's jaw cracked as he yawned, his mouth stretching wide like a feeding snake's.

Mike looked over in mock disgust. "Real attractive there, man," he said. The clicks and clacks of their controllers continued unrelentingly, even as the two bantered. They were old hands in the testing business, and they knew how to do the job without going crazy.

"Yeah, yeah, gimme a break," Jerry muttered, taking his right hand off the controls for a moment to scratch underneath his stubbly chin. "I can't sleep lately. I think staring at a screen may have finally short-circuited me. I feel like a robot half the time."

"Don't we all?" Mike replied, swiftly executing a choke slam on Jerry's avatar. Neither of them held grudges. It was just what you did when you sensed weakness, either in the game you were testing or in your opponent.

"At least it's almost done," Jerry said, his calm voice belying how fiercely he waggled his left thumbstick. His character struggled, but could not escape the final blow. He nodded wearily at Mike as he waited to respawn.

Dunn, supervisor extraordinaire and liaison to the world of game programmers, nudged open the door behind them and sidled back in for his last check of the day, looking like a sick, greased weasel.

"How we doing boys? The link still up and running?" he asked. Their game was connected to another group of testers on the far side of the building. It was as close as they could get to real-world conditions; after all, a game like this was lucky to even make it to beta. 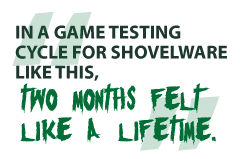 Mike and Jerry nodded without thinking, two perfectly programmed bobbing heads almost (but not quite) in time with each other. They had the conditioned synchronicity usually reserved for identical twins. One would think they had been working together for a lifetime. In actual time it was more like two months, but in a game testing cycle for shovelware like this, two months felt like a lifetime. Jerry really didn't understand why they bothered pumping out this generic shit on a high budget.

"Good, good," Dunn said. In all his managerial training, they never covered "making conversation with disinterested nerds," it seemed.

"Let the machines run," Jerry finally said after a few tense moments of silence. He couldn't stand being watched for more than a minute by a complete stranger. Years of fiction and obscurity had taught him that as soon as someone pays attention to you and you become important, life is hell. Main characters go through shit.

Dunn slipped out and the clacking resumed. Mike was taking on his partners across the building in a one-on-three melee fiesta, and Jerry took the opportunity to test some boundaries. His character ran into the wall, kept running in place, and then started to slowly circle around the edges of the map, jumping frantically. He hugged closely against the contours, looking for gaps or seams. It held up well almost all the way across until finally his character slipped through into oblivion and went limp. Ragdoll physics are probably the greatest job satisfaction in this industry, he realized as his character bounced a few moments, twitching violently in opposing directions.