The kitchen can be a wonderful place for creating mouth-watering dishes for friends and family. However, in my rather inept hands, a kitchen can also be a dangerous weapon. More often than not, it's a realm filled with foul language, foul smells and foul cuisine. Perhaps if I spent as much time actually cooking as I do playing cooking-related videogames, the stomachs in my household would ache out of a desire for seconds instead of an urgent need to expel their contents into the nearest bucket.

My strong dislike of cooking is on par with my love of videogames, yet combining the two yields a strangely satisfying middle ground that has consumed many hours of my free time. Admittedly, I derive a degree of enjoyment from the fact that the cooking game genre lets me skillfully do something I've never been particular good at in the real world. Hand me a controller, and I'll cook a delicious five-course meal without blinking. Give me a stack of recipes, some ingredients, an apron and a stovetop to attempt the same feat in the real world, and you'd better have the fire department and haz-mat team queued up on speed-dial. 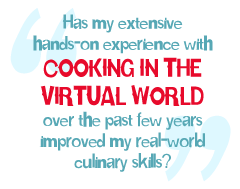 Still, I have to wonder: Has my extensive hands-on experience with cooking in the virtual world over the past few years had any discernable bearing - subconscious or otherwise - on my real-world culinary skills? Myriad hours spent making pixilated goodies would foolishly lead me to believe so.

Mama's eyes don't burn with hellfire for just anyone. It takes a special kind of incompetence to evoke such an explosive reaction - one I've enjoyed on frequent occasion. Don't be fooled; Mama's bubbly exterior and delightful personality melt away rather quickly when she catches wind of how badly you've fouled up her assigned food preparation task.

In 2006, Cooking Mama all but singlehandedly launched what is now a thriving gaming genre in the U.S. For the uninitiated, the cartoonish cooking title on the Nintendo DS lets you prepare numerous dishes under the watchful eye of Mama. Each step requires you to accurately complete a specific touch-centric task within a set time limit. Doing well earns you a bronze, silver or gold medal, while botching the recipe spurs Mama's fiery wrath.

Fiddling with the game's not-so-tight control setup is a pain. Then again, so is using many actual kitchen contraptions. In those early attempts at digital cookery, I found myself quickly addicted to unlocking new recipes to try out. The colorful, pixilated dishes appeared surprisingly delicious. Sadly, I can't say the same about my first tenuous steps toward making real food in my own kitchen.

Like quite a few of the food games to follow it, Cooking Mama contains no real pretense of actually teaching players anything substantive about cooking. It's all about minigames, completing challenges and unlocking meals. Take the food theme out of the equation, and you might as well be playing WarioWare. This suited me just fine at the time, but it also set gears turning in my subconscious.