I was diagnosed with Attention-Deficit/Hyperactivity Disorder (ADHD) when I was in 5th grade. I have all the symptoms - inability to concentrate, restlessness, hyperactivity. I've followed and researched different types of treatments ranging from behavioral therapy to medication. One of the more promising therapies is neurofeedback, which involves continually monitoring patients' brainwaves. Subjects attempt to change their brainwaves to a set pattern and receive an auditory signal that tells them whether they were successful. With enough repetition, neurofeedback can rewire a person's brain. A study published in 2005 examines how patients diagnosed with ADHD can learn to better maintain their concentration through neurofeedback. Depending on how individuals respond to this type of treatment, it can even be used as a replacement for medication. 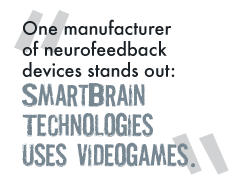 One manufacturer of neurofeedback devices stands out: SmartBrain Technologies uses videogames. Called the SMART system, it works as a modified PlayStation 2 or Xbox controller. A visor on the patient's head reads his or her brainwaves and sends the information to a processing unit. The unit decides how well the patient's brainwaves match up to a specified profile and adjusts the sensitivity of the controller accordingly - the more closely the patient can match the profile, the more responsive the game becomes to the patient's input. The controller sensitivity is not handled like an on/off switch; it's more like dimmer, able to provide a wide range of feedback.

The SMART system works with any game released for the PlayStation 2 or Xbox, but it's most effective with games that provide constant movement. The best genres are platforming and racing, as it's easy to feel when the controller is losing its responsiveness. After patients complete the training, they can still use ADHD medication but it will likely not be necessary.

The advantages of this approach are obvious: Unlike other software solutions, there is a library of games readily available for patients to use with the SMART system, and playing a game is inherently more engaging than listening for a sound. Many have found success using it. A 2001 study that used videogames with neurofeedback found that patients were more motivated and more likely to complete their treatment than with conventional neurofeedback.

Most neurofeedback systems are only available to clinics due to their cost and the experience they require to use them effectively. But the SMART system is inexpensive enough to be used at home. SmartBrain Technologies even offers a DVD version of SMART that adjusts the screen's brightness according to the patient's brainwaves. It was a move to open the technology to an older audience who may not be comfortable with videogames.

The idea of neurofeedback dates back to the 1960s. Promoted to the public as a kind of magic wand, it fell out of vogue when it couldn't deliver the impossible. As computers became faster and cheaper, better neurofeedback devices became available, triggering a resurgence of the technology.

The birth of the SMART system began at NASA in the 1990s. Dr. Allen Pope, an engineering psychologist, was trying to increase the awareness and attention of astronauts training to fly the space shuttle. When using neurofeedback in a flight simulation, he found improvements in the pilots' attention and engagement. He created a spin-off technology that used videogames, and NASA patented the idea. In 2001 SmartBrain Technologies was awarded the patents and went about adapting a system that was as big as a room and made for trained personnel. After years of work, the system was easy to use and small enough to carry around.

Letters to the Editor: Better Living Through Games The Escapist Staff 2 Comments