I never really paid attention to Latina game characters until I revisited Silent Hill 4 this year. The character of Cynthia Velasquez inspired me to explore other game characters to see how Latinas are represented. Of the few that exist, most fall into a couple of categories: temptresses, victims, gang members and other criminals. Several are employed in more respectable professions like law enforcement. Some have an exotic quality, often going hand in hand with being sexualized. And although real-world Hispanics have a wide range of skin colors, most videogame Hispanics are within a narrow range of tan to caramel brown. Their roles are most often minor ones.

A 2001 study by Children Now found no Latinas in the top selling games. More recent research by Dr. Elizabeth Behm-Morawitz of the University of Missouri-Columbia focused on videogame magazines and noted that Latinas accounted for less than one percent of characters and were not featured in game ads at all. I spoke with Dr. Behm-Morawitz as well as Raquel Bujans, a Tools Programmer at Kaos Studios, for some additional perspective from inside and outside the industry. 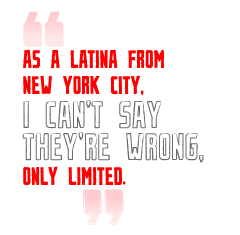 It probably isn't surprising that most of the Latinas I could find (and by no means do I claim an exhaustive list) are from urban crime-themed sandbox games. Grand Theft Auto IV alone has four. Others include Saint's Row's Luz and Crackdown's Violetta. The portrayals in these games are very stereotypical, but to be fair, most characters in this genre are caricatures. As a Latina from New York City, I can't say they're wrong, only limited.

Grand Theft Auto III and San Andreas feature Catalina, a bank robber who loves violence and uses men for sex and criminal partnership. Prostitute Lola Del Rio never actually appears in GTA IV, but her lollipop-licking image was used widely to promote the game. Mallorie Bardas is a less sensational character: She works for a living but still associates closely with criminals, including having an affair with a local crime boss. Elizabeta Torres, a drug dealer who feels her operation about to go under, is one character that isn't sexualized. She is tall and stocky. The game also implies that she may be a lesbian. She dances seductively with Carmen Ortiz, who is later one of antihero Niko's girlfriends.

Another trend was victimization. My inspiration for this piece, Silent Hill 4's Cynthia Velasquez, is the first of a string of victims that protagonist Henry meets. Dressed in a miniskirt and a tight, low-cut shirt, Cynthia immediately offers Henry a "special favor" in what she thinks is an alcohol-induced dream. Initially, I thought that Cynthia was a prostitute. But her portrayal as a sexualized victim is necessary for the misogynistic serial killer storyline. She is "temptation," the embodiment of female sexuality. When there is a plot-based reason for objectification, it seems somewhat more forgivable.