When I was growing up in Israel, my grandmother, Miriam, would drive down from Tel-Aviv every other Saturday to have lunch with our family. My little brother and I were usually too busy hunched over the family computer playing our latest game to greet her at the door like any respectful grandchildren would. One Saturday she came to find us at our usual spot with Kit Kat bribes in hand to persuade us to take a short break. When that strategy failed, she tried to participate by asking us what we were playing.

"This is Wolfenstein 3D," we answered, without lifting our eyes from the screen.

"And what do you do in Wolfenstein 3D?"

She stood there for what felt like an eternity in awkward silence, looking at the swastikas on display, listening to the sound of gunfire and the occasional soldier yelling out in German as he fell to the ground. I was young, but the strangeness of the moment didn't elude me. Here stood a woman whose entire life was forever changed by the invasion of the German army into her native Poland, watching her grandchildren casually gunning down her former oppressors with the click of a mouse. Looking blankly at the screen, she finally muttered, "I suppose that's OK" and left for the kitchen. 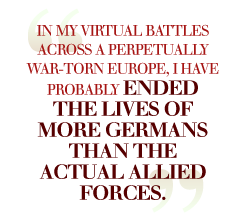 In a way, this incident allowed me to continue playing World War II-themed FPS games for years without giving them a second thought. Miriam said it was OK, and she experienced it firsthand. Who was I to disagree? So I shot the pixilated Nazis, and later, when technology allowed it, I blew them up into chunks that looked like an assortment of glazed hams. In my virtual battles across a perpetually war-torn Europe, I have probably ended the lives of more Germans than the actual Allied forces.

I'm ashamed to admit this, but a part of the enjoyment I derived from these games stemmed from a feeling that I was avenging my ancestors. Killing the minions of some monolithic and inexplicable evil has always been a staple of videogames. But for a Jewish person, when those hordes are Nazis, that's poetic justice. At least that's what I thought until Miriam passed away.

Soon enough, the last of the generation that witnessed World War II with their own eyes will die of old age. Holocaust memorial museums are desperate to find remaining Jewish survivors so they may document their testimonies before they're lost forever. They're preparing for a time when our primary link to that part of history is gone, making the task of keeping the memory alive all the more difficult.

I didn't feel that same urgency until my own personal link, my grandmother, was gone. When the responsibility of preserving the memory of the Holocaust passes down to my generation, all we'll have are the pictures, books, movies and yes, a large number of videogames that deal with those events. Each of these media has its own problems, but none of them are as thoroughly misleading as World War II FPS games.

Take Call of Duty: World at War as an example. What does it tell us about that war? We know it was fought exclusively between uniformed men from opposing nations, as even the battles that take place in cities are completely devoid of civilians. We know that the U.S. and U.K. were the infallible "good guys," that Russia's role was questionable but necessary and that Japan and Germany were immoral nations that had to be defeated at any cost.