At first glance, Don Thornton's virtual world looks like many others. It's when you listen that you notice the big difference: All of the characters speak Cherokee, and if you want to succeed in this world, you have to learn to speak the language, too.

To create this unique program, Thornton combined his background in native language education with a technology developed to teach Arabic to American soldiers in Iraq. Called RezWorld, the game blends a Second Life-style presentation with advanced artificial intelligence, speech recognition and self-adapting instruction. By immersing Native Americans in their traditional languages and customs, Thornton hopes to teach them how to preserve parts of their culture in danger of dying out. 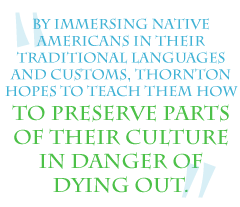 "My tribe, the Cherokee Nation of Oklahoma, has some very good language programs," Thornton writes in an e-mail interview, noting a real-world immersion effort that has only produced around 65 speakers in five years. "In the same period, we have lost thousands of elderly fluent speakers. We need to produce conversational speakers more quickly, and videogames seem to be the most effective method." He says the technology behind RezWorld has proven able to advance learners in one week to a level that other programs require months to achieve.

"When you play RezWorld, you must begin speaking immediately to play," Thornton says. "Students of second languages feel a tremendous amount of anxiety when they mispronounce words. Often, they are scared to talk to fluent speakers for fear of appearing ignorant or being laughed at. In our game, the characters still tease you if you mispronounce a word, but it doesn't have the same impact to be laughed at by a videogame character than a respected elder in your community."

When I spoke with him, Thornton was in Australia at the World Indigenous Peoples' Conference on Education spreading the word about his product and seeking a client to fund production of the first full version. While the pilot project for the game uses his own Cherokee language, Thornton's company Thornton Media, Inc. can adapt RezWorld for any other indigenous group, changing the in-game language and tailoring the environments and characters to suit a particular culture.

"We can actually be as customized as a tribe wants," Thornton says. "We can match the geographic terrain of individual tribes such as mountains, desert, forest, tundra. We can even put the faces of real tribal members on the characters."

He adds, "This is one of the rare times that the native cultures have a chance to take advantage of a new revolutionary technology before the mainstream."

What Makes Memes Popular? The Science of Memes Scott Shank 8 Comments
Comments on