If you can't afford a PC or even a console, you can get your game on at an arcade - and fighters still dominate the arcade. Fighters remain prominent in this venue for a number of reasons, but one of the most important is their quick turnover rate. Matches go by quickly. Head-to-head play generates a lot of heat, a lot of trash-talking. Dawson explains that, with fighters, "in just a few minutes, it's taken care of."

Turnover also pertains to fighters on consoles, because, where money is tight, only one kid in a circle of friends may have an Xbox. Fighters provide a great way to satisfy a roomful of players, because they keep the controller moving, whereas turns at other games that offer player vs. player competition can outlast the patience of those waiting in line.

"I know a lot of people get together in houses to play Madden," says Dawson, referring to EA's wildly successful football game franchise, "but then you need four or five setups - otherwise people are just hanging around." For the neighborhood console, fighting games make a lot of sense.

The Chinatown Example
In areas with high-density, low-income populations, this theory seems to bear out. New York's Chinatown has a large number of impoverished households, despite a high median income, because of its underground economy. Over on Elizabeth Street, you'll find J&L Game Trading, a well-known game store. I went in and asked what PC games they had in stock. "Hmm," said the clerk. "I think we have one ..." He searched under the counter, and it turns out he was right. They had one PC game: Quake II. Chinatown's pretty much a console-only district. It also boasts one of the last big arcades in the city, Chinatown Fair.

Justin Wong, one of the top fighting game players of all time, cut his teeth at Chinatown Fair, and his much lamented inability to reap riches from his skill is emblematic of the fighter community's fiscal woes. A couple of years ago, I asked Jonathan Lugo, who runs a number of fighter tournaments in New York, about the economics of professional play. He put it like this: "Look at Justin Wong. He's one of the five best players in the world, and he lives in his grandfather's basement. He should be living in a mansion!" said Lugo. "Or at least an apartment." 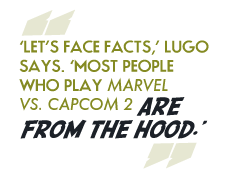 Money Isn't Everything
Lugo used to work at Web2Zone, a gaming lounge and cyber-café in Manhattan. I caught up with him again this winter. These days, he sets up fighting game tournaments at colleges in the city. He agrees with Dawson that money plays a vital role in determining who becomes a professional player at what sort of game. In addition to the arcade argument, he also points to the fact that many fighting game tournaments feature old games, which are even cheaper to come by than Dead or Alive 4.

Marvel vs. Capcom 2, now nearly a decade old, is a big draw on the American fighting game circuit, and Lugo cites it as evidence. "Let's face facts," he says. "Most people who play it are from the hood."