He means "hood" in all of its connotations, because Lugo wants to explain why fighting games, rather than just any old cheap game, have such appeal in the inner city. He sees a correlation between the environment in which people live and the games they want to play. Or, to be more specific, he finds that a player's neighborhood shapes his gaming desires. 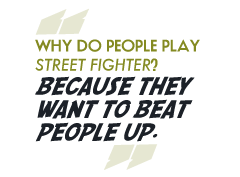 Lugo's simply saying that the suburban white boys who dominate Halo competitions grow up with a different experience of violence than the inner-city African Americans, Asians, and Latinos who dominate fighters. "They're trying to find something that reminds them of their lives," he says of the latter. Lugo thinks that fighting games give these kids a feeling of control over violence - a feeling that eludes them in their daily lives.

Who Plays the Black Guy?
But this argument only goes so far. For one thing, it's not the case that minority players of fighting games necessarily come from poor backgrounds - or urban ones. Nor do they necessarily grow up in the arcades. Jeremy "Black Mamba" Florence, who won the first Dead or Alive world championship in CGS, started out primarily as an online player.

This is where the character explanation comes in. When I asked Michelle Pleet, one of the women players of DOA at CGS, how she would explain the demographics of her colleagues, she said, "I think it has a lot to do with the game itself." Fighting games often have huge rosters of playable characters, and these characters tend to be racially diverse. "Shooters don't have that variety," she said.

Pleet is extending an argument commonly made by women who play Dead or Alive. Despite the game's investment in top-of-the-line breast physics - and infamous "bounce" settings - DOA has always enjoyed popularity with women and girls. "DOA somehow finds a way to attract men and not be offensive to women at the same time," she said. Pleet and a number of her peers find the strength of the ladies of Dead or Alive appealing. She imagines that the racially diverse cast of DOA - and of fighting games more broadly - may do the same for minority players.

Fighting game line-ups do tend to have a rainbow coalition look, and there's a clear logic to this casting. Fighters try to include as many different fighting styles as possible, and an easy way to visually communicate that a character employs a certain style is to give him a race typically associated with it. Thus, you get black boxers, Chinese kung fu fighters, Japanese sumo wrestlers and so on.