Of course, these conventional associations between race and fighting style have never been stringently applied. Dead or Alive features a brother and sister pair of black Americans, Zack and Lisa. He practices Muay Thai, while she does lucha libre.

But the point remains that Dead or Alive offers as much racial diversity as fighting games do in general. Dawson agrees that fighters feature more varied casts than other genres, but doesn't think that minorities play them for this reason. Players choose characters for the gameplay advantages they provide, he observes, not according to race.

Lugo agrees, saying that players don't often talk about the race of a character as a draw. "I wanted to play Marvel vs. Capcom because of Spider-Man," he says. "Eventually I found out that Spider-Man's a shitty character, but that's why I started playing it."

Still, Pleet isn't saying that being drawn to certain characters means you have to play as them. Though Dead or Alive's juicy chicks interest her, she plays as Gen Fu, a dried-up old Chinese guy. 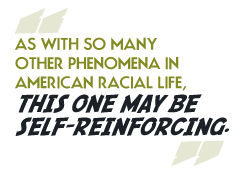 Kids of the New Arcade
The closest we can come to unifying these theories is to say that the arcade fighting game community replicated itself in the tournament circuit.. While the racial diversity found in the games themselves may attract minority players, the demographics of the competitors almost certainly does. As with so many other phenomena in American racial life, this one may be self-reinforcing.

Not too many people discuss race in the fighting game community. "It's still really taboo," says Lugo. He thinks this taboo may stem from an unwillingness to confront the idea that the broader gaming audience lacks an interest in fighting game competition because of the race of the competitors. I'd argue that this taboo also exists among the community of people who cover games for much the same reason.

How you decide to approach game journalism implies the demographics of the people you'll report on. If you talk about games as works of art in themselves, like film or literature, then you'll talk to and praise the work of game developers. If you argue that the unique excellence of games lies in their interactivity - if you think of them as performance - then you'll take an interest in people who play them at a very high level.

These two groups exhibit clear differences in class and race. Talking to a pro gamer is very different from talking to a programmer. So how do you decide which one to talk to? It's one thing for a white game journalist to sit at home and type up his reviews; it's another entirely for him to walk his ass into a Smash Bros. tournament. It's intimidating to take on the role of minority. This kind of reporting lies outside the comfort zone of most gaming media.

Ray Huling is a freelance journalist living in Boston.