Post-Mortem on Championship Gaming Series
The rise and fall of the Championship Gaming Series provides plenty of fodder for those interested in figuring out games' place in society. The demise of the largest, most high-profile attempt yet at establishing a professional gaming league settled one matter. While debates continue over whether games belong under the rubric of art or if they can play a role in education, the question of whether they can serve as a spectator sport seems resolved: No - or at least not yet.

The CGS phenomenon also bequeaths us a wealth of material on other, thornier, more specific issues. Foremost among these is the question of how games correlate with race. I'm talking straightforward demographics: Why do games have racially segregated fanbases, and what effect do these divides have?

During the 2008 season, six North American CGS teams fielded a total of 60 players, each of whom competed in one of four games. Among these games was Tecmo's Dead or Alive 4, the latest installment of Tomonobu Itagaki's notorious fighter. CGS divided DOA competition into men's and women's leagues, the only game to receive such treatment. Each team included two DOA players, one man, one woman. Here's where demographic differences become very visible. Of the 60 competitors in CGS' American league,13 were people of color. Six of them played Dead or Alive.

The Homogeneity of Dead or Alive
The concentration of minority players in DOA competition is even more striking when you look at the men's side. Six men constituted the league: four black, one Latino, one white. The fighting game community, on the whole, regards Dead or Alive with scorn. They see its mechanics as unsophisticated. Yet, aside from all the women, DOA's fanbase exhibits the same demographic trends as the wider community. 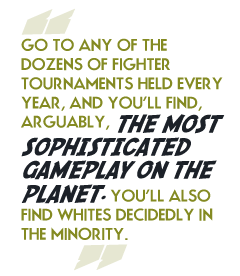 Go to any of the dozens of fighter tournaments held every year across the U.S., and you'll find, arguably, the most sophisticated gameplay on the planet. You'll also find whites decidedly in the minority. How the majority breaks down depends on location. In rough terms, Asians dominate the West Coast; blacks and Latinos dominate the East.

The Three Theories
Fighting game competitors tend to explain this situation in one of three ways - by arcades, by characters or by culture. Bryan Dawson wrote the Prima guide for Dead or Alive 4 and covered Dead or Alive competitions for CGS. Dawson links race to class to understand the dominance of minorities at fighting games. "It's just a lot easier for that demographic to get their hands on a fighting game," he says.

He's talking about material wealth. Dawson points to one of the other marquis games of CGS, Counter-Strike. To become an expert player of that game, he says, you need not only a PC that can run the game smoothly, but one that can be dedicated to Counter-Strike for significant stretches of time. A kid who aspires to a career of playing PC shooters would do well to have a high-end PC of his own. That's a rare thing in poorer minority communities.