Now more than a year after its release, Team Fortress 2, Valve's stylish class-based first-person shooter, still draws dozens of servers full of skilled players at any given moment. From day one, it's provided players with an extremely satisfying multiplayer experience. But while the core gameplay is as strong as ever, it's not what has kept the TF2 community thriving well past day 400. For that, you can thank Valve's ongoing improvements, additions and adjustments to the game.

New downloadable maps and gameplay modes in the months following a game's initial launch have become commonplace, but the slew of class-specific unlockable achievements and special weapon upgrades that Valve is slowly rolling out for each of the nine playable classes in TF2 have tremendously boosted the title's replayability. Unlocking these class upgrades requires you to rack up a number of challenging achievements. Fortunately, the task is highly addictive and the rewards extremely satisfying.

TF2 has existed in some form or another for around eight years, according to Valve's Robin Walker. One of the creators of the original Team Fortress mod, Walker says the version of the sequel that hit store shelves along with The Orange Box took about a year and a half to build, but it benefited from numerous gameplay experiments Valve tinkered with during the lengthy development cycle. While the game transformed substantially from one iteration to the next, the team's drive to improve the gameplay based on player feedback continues to usher in many additional and exciting changes.

Class Warfare
"We always planned to continue evolving TF2 after shipping, but it wasn't planned that we'd focus on class updates," says Walker. Shortly after launch, his team immediately set about the task of releasing frequent, smaller updates to the game via Valve's Steam service. These updates made subtle improvements to gameplay and performance but didn't garner much attention or draw many new players to the game. Eventually, the team switched tactics, focusing instead on releasing larger chunks of high-profile content featuring tangible changes to each of the game's character classes, in addition to minor bug-fixes and balance tweaks. 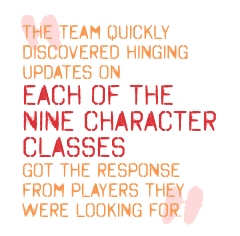 The first of three major updates rolled out in 2008 focused on the Medic class, giving players 36 new achievements to unlock three new items. It also introduced a new map and Payload, a new game mode. The next substantial update focused on the Pyro class, adding more achievements and unlockable weapons to the pile. It also added a compressed air blaster to the default flamethrower and two new player-created maps. A massive third update provided the Heavy class with extra achievements, boxing gloves, a new minigun, a health-restoring snack, a new arena mode and more extra maps.

The team quickly discovered hinging updates on each of the nine character classes got the response from players they were looking for. "The updates we've released have had a considerable impact on both the ongoing player numbers and the sales of the product," says Walker. Not only has each update drawn in many new players, but a substantial number of them stay after the initial spike in interest.