As work continues, Valve is also slowly chipping away at a laundry list of problems that crop up over time between the character classes. Among other large-scale issues on the agenda, Walker says the Spy's disguise has nearly reached the end of its lifetime. Over time, average players have become much better at detecting and dispatching disguised Spies, making the ability pretty useless for all but the sneakiest of players. Additionally, Walker feels the Engineer's sentry guns have become "too binary." They're highly lethal to some players and wholly ineffective against others. Sentry guns are also easily dispatched by skilled players, leaving Engineers with little recourse. Keeping a delicate balance is important, as is adjusting problems that arise from the way players utilize the different abilities of each class in the game. 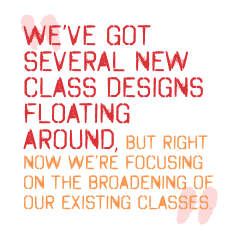 Though there are still six more classes to upgrade, the release of an eventual new class isn't out of the question. Rumors of a possible 10th class teased in an Easter Egg found in the first mission of Left 4 Dead set players abuzz. Walker says they haven't made any decisions about adding new classes yet, but that doesn't mean they're not considering them. "We've got several new class designs floating around, some of which we like a lot, but right now we're focusing on the broadening of our existing classes through the addition of the unlockables," he says. In the meantime, the weapon selections offered through the upgrades have created subclasses that let players specialize in certain tactics, such as using the Pyro's Backburner flamethrower to ambush opponents.

"We've got some ideas as to where we'd like to go, but like always, we'll be trying to stay fluid and responsive to customer feedback. We're aiming to keep shipping class updates, trying out new game modes and evolving the way we can bring players into the ongoing design of the game," Walker says. "We're still very excited about TF2, and in particular, the safer test bed for innovation that it represents. We aim to try out some riskier, and hopefully more fun, design choices in the near future, with a view to learning from our players as to what works and what doesn't."

This model has been very effective, says Walker, and Valve plans to continue it for the foreseeable future. The ease of releasing updates through Steam factors heavily into its appeal. It creates a crucial means for quickly measuring the effectiveness of design choices. "We can make a change, receive feedback on it immediately from actual customers and then improve it," he says. "We can innovate in this model without fear of getting too far off the tracks, because the measurement process (i.e. real player feedback) will steer us away from the edge."

Despite his most concerted efforts, Nathan Meunier has yet to be shot, burned, bludgeoned and blown up in a single life.