As every stereotypical young girl knows, horses are fascinating. This isn't lost on games developers either; many include an equine buddy for the protagonist to ride. Link had Epona in Ocarina of Time, Wander battled the colossi with the help of Agro and Altaïr can ride fruitlessly around the kingdoms of Assassin's Creed for 15 hours on a variety of multicoloured steeds. Not so many titles, however, give horses to the hero's friends and foes and throw them together in frantic third-person medieval skirmishes. I guess Bratz Ponyz might do in a pinch, but frankly I'm frightened by games which feature animals in heavy eyeliner.

Thankfully, those interested in serious horsey combat can play Mount & Blade instead. Released in boxed form in September 2008, M&B is perhaps best described as a medieval version of Elite - that venerable space trading game. As a lone fighter/noble/former pop idol, you're dumped near a training ground and town (Lave Station) in the land of Calradia with little more than a weapon and a horse (your Cobra Mark III.) Progression from this point is largely up to you, but whether you undertake a career in trade, villainy or derring-do, it will inevitably feature a great deal of splendid third person, horse-to-horse combat. 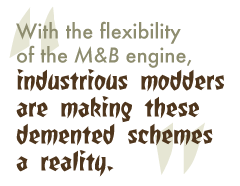 Of course, it's not possible for players to do entirely as they please. No matter how much they may wish to, players cannot take an entire village hostage and threaten to kill the inhabitants off one by one until the local lord agrees to a gigantic ransom pay-off. But with the flexibility of the M&B engine, industrious modders are making these demented schemes a reality.

Horseplay
M&B's boxed release barely tells the full story of its development. Originally the project of husband and wife team Armagan and Ipek Yavuz, the title was funded through an inventive pay-for-beta system. Realizing they were unlikely to complete their vision of a medieval combat simulator without further investment, the pair offered the work-in-progress at a knock down price, with the promise that anybody purchasing at this early stage would have free access to any subsequent versions. As the game neared a final release, the price for joining the beta process gradually crept up, ensuring that those who had shown early faith were rewarded. This creative business model could easily have flopped, but the game's open world and skill-based combat system, which placed timing and physics above pure stats, sufficiently tweaked the public's interest. By the time they released version 0.894 in October 2007, the team had expanded their studio to six people. They got more help in 2008 through a deal with publisher Paradox Interactive.