That ability to bend and shape one experience into something else entirely has only become more prevalent with the advent of sandbox games. An open world, a rudimentary physics model and some friends are all that's required to have fun. Initially appealing to a niche audience on PC, Operation Flashpoint quickly became renowned for the unending freedom it presented players. While the game included multiplayer modes, they were often ignored due to a punishing difficulty curve and the fact that it was more fun to race tractors across an island. It's relatively easy to find examples of impromptu, free-form game modes that utilize the game world as a playground instead of obeying its arbitrary rules. Fancy a game of cops and robbers, where the bad guys drive Škodas and the good guy has an Apache Longbow? Operation Flashpoint makes it possible.

When applied to a multiplayer environment, this kind of sandbox design leaves almost everything up to your imagination. Standard FPSs may include the ability to set a wide range of variables before each match, but you're ultimately wandering the same corridors with the same weapons and essentially the same challenge. Without total cooperation, like that exhibited by infinite Trajectory, true freeform gaming isn't possible. 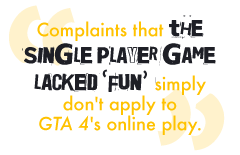 Grand Theft Auto IV's designers applied this same thinking from the outset. Almost every game mode you can think of has been built into the game's multiplayer arena. The best one by far, however, is the party mode: You and some friends spawn in your own instance of Liberty City with full access to the map and the weapons. What happens next is completely up to you. You can re-enact a gumball rally by driving to one end of the game map and racing across to the other side, hop in a bunch of helicopters and race around the skies or grab some scooters and head to the skate park to do some tricks. Complaints that the single player game lacked "fun" simply don't apply to GTA 4's online play.

The community at RLLMUK has taken this one step further, though. Keen to avoid the scourge of Xbox Live, the "randoms," they arrange their own games between understanding members of the same gang, encompassing most titles of the moment. In the case of GTA IV, this has taken the shape of a racing league - 16 racers take part in 10 races on a weekly basis.