I discovered I could fly in the year 2000. It followed weeks of humiliation at the hands of my friend, who had already mastered the skill. Each day's work would draw to a close and that familiar sense of dread would begin to set in. The same routine occurred each time: pack up, move to the other room, get chased, botch the timing, plunge into molten lava, die. It was getting tiresome, so I did something about it. I practiced, over and over again on the same spot.

I was determined things would be different this time. I honed my focus, and our dance began. I concentrated on my single goal for the evening, to join him in the skies. I grabbed the rocket launcher, ran towards the outcropping and lined up my shot. I knew he was right behind me, anticipating my failure and already relishing the moment. I jumped and, a moment later, fired.

Catching the jump pad perfectly, I ricocheted back the way I came, arcing gracefully through the air as I grabbed the BFG and landed on the upper ledges of the castle across from the precipice. I took a second to relish the moment before I unleashed hot plasma death, gibbing him before his feet touched the ground. 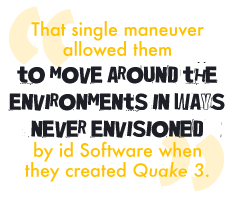 This experience set in motion almost two years of zealous mediocrity. I swallowed up every map release and every mod with a passion I haven't felt since. Other people did more, took it further and aimed for perfection. Their passion focused on that single maneuver, allowing them to move around the environments in ways never envisioned by id Software when they created Quake 3.

Tricking iT2, by infinite Trajectory, became the public face of this freestyle trick-jumping community. It's old news now, having originally been released in 2004, but it demonstrates the way that multiplayer games create playgrounds that are open to exploration and experimentation. While the video certainly wouldn't have existed without an online audience to view it, the opposite is also true: the dedication required to invent a wholly new way of moving through Quake 3's spaces couldn't have existed at all without the encouragement of spectators. The growth of an entire community around this single, non-combative objective is a straightforward reminder that we, the gamers, have more agency in the virtual worlds we inhabit than the creators may have intended.