They say everyone has a story in them. So far, Jim has managed to conjure up three. He's not quite made the bestseller lists yet, and searching on Amazon for his exploits won't turn much up either, but Jim's stories are not the sort that often make it into print. He's been setting his tales of heroism, comedy and pet murder in the worlds of big-budget videogames - a sort of pixel fiction, if you will - and he's not alone. It's a trend that's beginning to open itself up to the broader audiences of the web.

The concept of war stories is nothing new. The thriving worlds of after-action reports (AARs) have long existed, mostly hidden away in the undergrowth of online forums and web communities. For the uninitiated, it works exactly as it sounds - you play a game, and you tell its story afterwards to anyone willing to listen. It's particularly popular among the more meticulous and strategic gaming communities, where the method of play is more unique to you.

Paradox Interactive's line of rich historical strategy games is a shining example - it contains a multitude of options, statistics and ways of achieving victory, as well as a setting interesting enough to make itself worthy of a little roleplay. Their forums read like the blog of a TV history channel, mixing game accounts with footage and images from the real wars and eras they are describing, creating a surreal retelling of some quite famous and, in some cases, quite recent periods in global history. 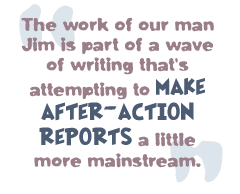 But the work of our man Jim, a mild-mannered student from England, is part of a wave of writing that's attempting to make the concept a little more mainstream. So far, his repertoire includes tales of his Roman family's conquest of Europe in Rome: Total War, the life and times of a man mistaken for Agent 47 in Hitman: Blood Money and the beginnings of an alternate history of Ancient Egypt in the classic strategy game Pharaoh.

His work picked up steam when he was featured on the videogames blog RockPaperShotgun, culminating in a brief spell of fame among the blogging community and a spot in U.K. games magazine Edge as Website of the Month. But Jim himself was startled to reach even a hundred readers, let alone five-figure numbers. "Having a bigger audience than I expected was a nice bonus, but I don't particularly enjoy expectation," he explains, as he puts the finishing touches to reposting his Rome tale on a new blog. "You should be writing about things which not necessarily everyone will see. [Gamers] read them as some extra entertainment that they can identify with after they've played the game."

Jim's Hitman blog certainly managed that, as his hapless protagonist stumbles into the world of international assassination entirely by accident and approaches his missions in increasingly ludicrous ways, from trying to "secure" explosive suitcases in lifts to his unhealthy attachment to a nailgun. And it was Jim's first-time enjoyment of the game that allowed his blog to generate this fun. "You can write a good diary on basically anything if you like the thing and can get that across," he says.

Hitman - Agent 47 - Did They Even Play the Games? Marter 31 Comments
Comments on