Looking back on that old "Can a videogame make you cry?" ad from EA, it's clear now that the question it posed was irrelevant. If a movie as cynically manipulative as The Notebook can bring an audience of thinking adults to tears, it seems reasonable to ask why "induces weeping" should be numbered among the criteria for judging artistic merit. Yet the sentiments behind this question, with its crude understanding of art and our relationship to it, are the ones that guided gaming into an era where games seem to either take themselves ridiculously seriously or go out of their way to be inoffensive.

In this way, gaming has quite precociously caught up to the rest of our entertainment culture. The sharp division between "realistic," "gritty" games and bright, cheery "all-ages" games is yet another manifestation of our flight from intellectual complexity and emotional nuance.

Consider the state of gaming in 2008. Mario and Link continue to have adventures in colorful and magical realms, a lot of JRPGs continue to offer classic stories of heroism and self-discovery in the lives of child-like protagonists and Sackboy sure wants everyone to have a nice time. On the other hand, gamers have also been invited to help Niko Bellic lose his soul (several times over in the course of a single game), wage endless, hopeless wars with Marcus Fenix and Nathan Hale or wander the wastes of post-nuclear war America.

None of this is meant as criticism of these games; whether or not they're good is beside the point. Rather, I would argue that it's entirely possible for the individual works to be improving in execution while the medium as a whole stagnates or even deteriorates. Sean Sands noticed the same troubling pattern in his "Playing It Safe" piece for Gamers With Jobs:

Individually I can take no exception with any of those games, except perhaps to say that I will look back and remember I liked these games without really remembering anything about them. ... Call it idealistic longing for days gone and never to return, but I grew up in a time when games were daring. Now they are commodities, and worse they are so by choice. 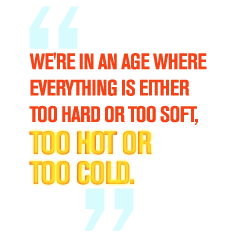 It's not difficult to see why the landscape seems so bland following a year that some might consider embarrassment of riches. Look at some of the biggest games of 2008. Most AAA productions were, for the most part, unsmiling and self-serious trips through hell. They were games like Grand Theft Auto IV, Gears of War 2, Metal Gear Solid 4, Fallout 3, Dead Space ... you get the idea. At the other end of the spectrum were games like Super Smash Bros. Brawl, LittleBigPlanet, Wii Music and Mario Kart Wii. We're in an age where everything is either too hard or too soft, too hot or too cold; and "just right" is nothing but a memory and a hope.

What is important to remember here is that videogames are hardly unique in this polarization. Our culture is beset by the same compartmentalization of emotional experiences. Though I'd never guess it from looking at our present-day mass entertainment, I'm pretty sure there's more to life than farce, fairy tales and tragedy.