I remember my first encounter with BioShock, and with a shiver I recall the tossing seas, the sense of impending doom that accompanied the decisive clanking-shut of the door of the bathysphere as I descended the icy depths of the waters to enter a fading dystopia littered with eerily cheerful post-war artifacts. Something unidentifiable but appropriately mirthless played in the background: I catch a hint of cellos. The grimy walkways and fading paint all bespeak years of neglect. And of course, the sole living creatures within easy reach are all victims of a social experiment gone horribly wrong. Naturally, it was necessary to take up the mantle of the intervening role. What better reason did I need to linger in front of the computer far into the wee hours with bloodshot eyes?

Games must be violently tragic to qualify for an all-nighter. The very moment your eyes are scanning these words, an atrocious number of humans scattered across the planet are leaning intently into computer monitors, their faces lit by the glow of the screen as they battle deep into the night against some evil power. I've been guilty of more than my share of gaming marathons, emerging haggardly but triumphantly from the fray as daylight crept in. Some of you might smile furtively as you vaguely recall some episode of gaming mania that struck you and held you fast in its grasp until you vanquished the final boss, looked up at the clock and turned in for a few hours' worth of shut-eye. Others will shake their heads in incredulity at such single-minded devotion to the gaming altar. 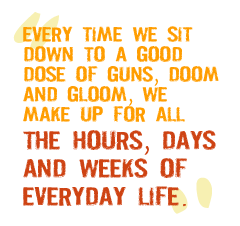 Yet there is nothing more gratifying than being cornered by a gaggle of bloodthirsty beasts with the solid reassurance (in the form of a serviceable bullet-spraying device) of being able to do something about it. Every time we sit down to a good dose of guns, doom and gloom, we make up for all the hours, days and weeks of everyday life. It might seem odd to some that such pleasure could be found in gloom. Gaming is supposed to divert us from the tragedy of our own lives, after all. In truth, however, gaming isn't about diversion - it's about diving into the deepest part of our consciousness, the unexplored regions of humanity which our mundane existences foreclose. Gaming is an outlet for the imagination that finds itself frustrated by the exacting demands of a conventional society sterilized of risks.