Let's visualize the alternative. Imagine, for instance, sneaking to your computer in the dead of night. It was too much to have left Diner Dash alone - you were on the nth level and virtually moments away from a high score. Fingers twitching, you slide into your seat, where you remain until the crack of dawn.

No, assuredly quite impossible. I would blush to admit having succumbed to a caper like that. Yielding once or twice to the lure of lighter fare is forgivable. But regular playing of happy, deliberately smile-inducing games? The very thought is unwholesome.

As Leo Tolstoy wisely remarked in his novel Anna Karenina, every unhappy family is unhappy in its own way, but happy families are all alike. Tragedy naturally gives rise to variety. Can you imagine how much of a dearth of excellent games there would be if guns and doom were banned? No doubt there are those who point to the predominantly male portion of the gaming population as the primary reason for the popularity of gloomy, gun-driven games. Those same people would do well to note that the conceptualization of the testosterone-driven player swilling cans of beer as he pilots his gun-toting avatar through successive waves of enemy soldiers is rapidly going the way of the gramophone and the VCR: something that nobody would remember but for your great-aunt Sophie. Instead, I'd argue our preoccupation with aggression and melancholy reflects the fascination that such subjects have always held for humans. Shakespeare's most popular plays are his tragedies; thus, we remember Romeo and Juliet but not Orsino and Viola of the comedic Twelfth Night. 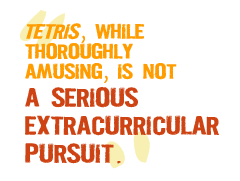 Gaming must be oppressive. Tetris, while thoroughly amusing, is not a serious extracurricular pursuit. We are in a continual struggle against our baser instincts. Gaming gives us a way to get into touch with our profounder selves, to access that deeply buried part of our personality which longs to break free of the suffocating confines of the routine. Casual games, with their eagerness to amuse and painfully diligent efforts to reward the player with points gained and bonuses earned, lacks the dignity of tragic heroism. Thus, I embrace the doom and gloom. My conscience wouldn't be able to answer for it otherwise.

Christina J.C. Hsieh is currently marooned on a small mosquito-ridden island in the subtropics off of continental Asia.