As anyone who's ever dropped in on a particularly intense session of gaming can tell you, there are many types of gamer frowns. First, there's the sort of grimace provoked by extreme exasperation, typically characterized by clenched teeth and twitching facial muscles. Keen-eyed observers will also be familiar with the expression which I dub "the mask of intensity": eyebrows scrunched together, lips stonily unvarying for the duration of the session. When a player assumes the mask of intensity, you know that disturbing her will bring you a fate worse than death. 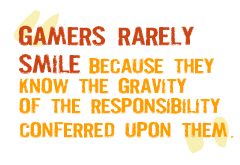 You won't find many gamers who giggle with glee as they click and tap their way late into the night - but that is easily explainable in the context of other, similarly engaging pursuits. Did Leonard Bernstein smile as he stepped up to the conducting platform with baton in hand? Or that great philosopher, Plato, who is said to never have smiled once in the presence of others, let alone give way to unbounded merriment? Gamers rarely smile because they know the gravity of the responsibility conferred upon them. Every day, at every hour, some great danger threatens the world, looming darkly over the horizon as the populace mills on, unconscious and unawares. Thus, gamers sacrifice their time to honor their greatest and noblest obligation: to become enlightened and find peace and resolution. The vicarious aspect of the experience doesn't make it any less real. Did anybody, after reading the untouchable classic Flowers for Algernon, willingly finish dry eyed? Females, recall the climactic moments of Titanic. Admit it - your hearts fluttered, your breath left you and you staggered from the theater as dazed as the film's hapless heroine herself.

"Gaming" is a rather misleading term. It summons to the mind images of lighthearted, frolicsome merriment, of dancing and laughter and joy and the carefree things in life, of merry-go-rounds and ponies and frivolous entertainment. Gaming is an exertion, and its effectiveness resides on two levels: its external purpose as a form of entertainment (that is, as a way of spending one's leisure hours in pleasurable occupation), and its internal objective (or the purpose set forth by the game itself, the mission the player strives to accomplish in order to progress further). We all know "it's just a game" - that's the external purpose, the ostensible rationale for spending a couple of hours straining wrists and eyes in front of a screen. However, at some point during the game, the external meaning imposed upon the experience recedes to the background, and the player is only conscious of the immediate here-and-now of the game's internal objective. She slips effortlessly into the role decreed by the game, and the game takes on a greater meaning than what the real world has determined. At this critical juncture, a gamer never smiles, because she has ceased to become a gamer.