2. Aggressive personality
"One glaring problem with most studies of violent game effects is their failure to consider which groups are at most risk," write Kutner and Olson. Even those who claim videogame violence causes real-life violence don't believe the effects of violent games are universal. It's very important, then, to find out whether common characteristics exist among individuals who are strongly attracted to violent games or seem more affected by them. Some studies suggest that personality characteristics like aggression may be genetic, which would mean that some people are naturally more aggressive. Those people may enjoy violent videogames more than the average person. 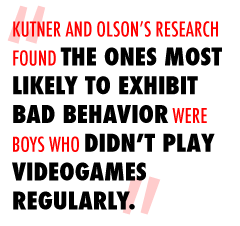 Playing violent videogames may not necessarily be a bad thing for them, though. Fragging Locust Horde or ripping spinal cords out of virtual opponents may be a cathartic release for people with aggressive personalities, offering them a way to act violently that doesn't affect the real world. Out of a group of more than 1,000 middle-school kids, Kutner and Olson's research found the ones most likely to exhibit bad behavior were boys who didn't play videogames regularly.

3. Sensation-seeking
Another personality trait that may increase the odds of regular visits to Liberty City or Stilwater is the desire for new feelings and experiences, what psychologists call sensation-seeking. Either by nature or through nurture, sensation-seekers crave stimulation more than the average person and are more willing to take risks to get it. This personality type is often positively associated with the extreme sports crowd and glorified in terrible Mountain Dew commercials, but sensation-seekers have also been linked with increased drug and alcohol use.

With their constant visual stimulation and visceral thrills, videogames are also appealing to sensation-seekers. And you're more likely to find them entrenched in a Halo marathon than an all-day Bejeweled session. Many research studies split subjects into two groups where one plays an action-packed violent game (Grand Theft Auto or Doom) and the other plays a more laid-back, nonviolent game. (Myst seems like a popular choice among researchers.) However, some of the measured differences may not necessarily be related to the violent content of the first group, but just the sensation-seekers getting the action "fix" they enjoy.

4. Roleplaying
In his book Killing Monsters, Gerard Jones argues that kids need imaginary violence to grow up normally. It gives children a safe way to explore behaviors they usually have to repress. "Being evil and destructive in imagination is a vital compensation for the wildness we all have to surrender on our way to being good people," Jones writes. When a child maims minotaurs as Kratos in God of War, he knows he's doing something that would be wrong to do in real life. That's what makes it fun. Violent gaming could be a way for children to explore violent behavior, safely express their aggressive urges and get it out of their systems. Jones writes that such play can "enable children to pretend to be just what they know they'll never be."