When it comes to videogames, psychologists and social theorists have been asking the wrong questions. Instead of obsessing over the purely correlational links between violence and videogames, researchers would find more value in simply asking why people - young boys, in particular - are attracted to violent media in the first place.

The worlds of videogames are often dark, frightening and gory places, especially in the action and adventure genres most popular with boys. That's not surprising given the history of children's media, which is full of doom and gloom. In part of their book Grand Theft Childhood, Harvard researchers Lawrence Kutner and Cheryl Olson document some of the macabre entertainment that has been madly popular with kids of previous generations, including British "penny dreadfuls" and American dime novels from the 19th century, early violent films featuring mobsters and other criminals, crime and horror comic books from the 1930s to 1950s and pen-and-paper roleplaying games labeled as "satanic" by ignorant critics. 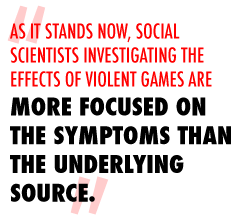 One would think that discovering why kids like to be entertained by dark, disgusting and violent subject matter would be important to researchers. After all, finding out what attracts kids to violent videogames could explain why researchers sometimes find correlations between gaming and aggressive behavior. It's likely that the reason some kids behave aggressively is the same reason they play violent videogames, or why some play more violent games than others. Instead of casting blame and attempting to censor the media, researchers should investigate the root causes of violent behavior. But as it stands now, social scientists investigating the effects of violent games are more focused on the symptoms than the underlying source. They're like doctors so squeamish about the sight of blood that they frantically bandage their patients without even examining their wounds.

Culled from current research into other areas of children's development, here are seven of the many possible explanations for why kids may be attracted to violent videogames:

A person's level of education or intelligence is itself a tangled web of correlations that has sparked many unsettled "chicken or the egg" debates. Poverty is related to less education. So is having uneducated or negligent parents. Genetics may be involved. Racism can be a factor as well, as some studies suggest some education systems don't treat people of all races the same.

Studies that find a correlation between a preference for violent games and violent behavior may actually be finding a correlation between a lower education level and violent behavior. The cause of the lower education level may be poverty, meaning that the original videogame study actually found a relationship between poverty and violence, not gaming and violence. Tracing the roots of violence this deep gives a much greater perspective on the problem and calls for more thoughtful, far-reaching solutions than simply restricting videogame sales.